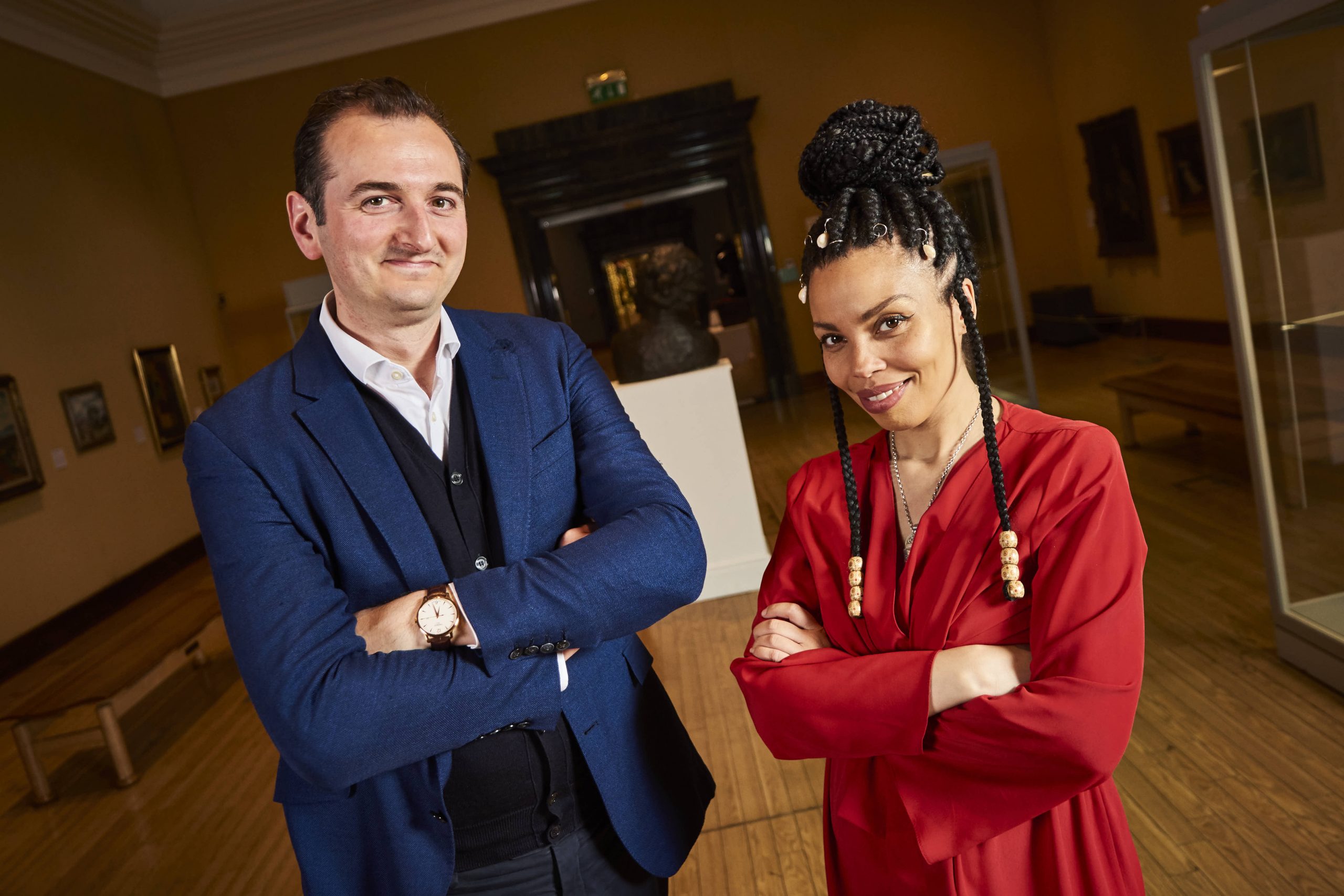 I meet Bendor Grosvenor outside the Sackler Library, where he has just completed filming for the Oxford episode for the latest series of Britain’s Lost Masterpieces. Bendor and his co-host Emma Dabiri travel to some of Britain’s great galleries and public collections with the BBC Four programme, seeking to track down previously unknown paintings by some of the world’s finest artists. This episode, filmed around Oxford, investigates one of the Bodleian Libraries’ most striking paintings, which Bendor believes to be a portrait by the great Italian Baroque painter Pompeo Batoni.

The programme uses the Art UK website to track and trace some of the most important unattributed art in Britain’s public collections.

“Art UK, which seeks to “democratise” art, was started by Fred Hohler who one day said he was going to photograph every painting in the country, and he has. It took him 20 years! He’s done it; it’s all finished, and he did it all privately supported. So the series is based on his work. We go through the website and I scroll through and I look for paintings with no attribution and if something pops into my head and I go, “oh that’s by Botticelli or something” then we’re off! It’s about a one percent hit rate so for every hundred pictures I look at and investigate, one might turn out to be interesting.”

The Oxford episode follows the story of a potential Batoni painting of a former Merton student, George Oakley Aldrich. Aldrich took his degree in medicine in 1745, when the advancement in the field relies on cutting up the cadavers of condemned murderers. When Batoni was studying, the university used to take the cadavers fresh from the gallows, and fights would break out between the university officers and the families of the hanged criminals as to who could claim the cadaver first. In the programme, Bendor seeks to place Aldrich in Rome after he completed his degree, where Batoni exclusively lived and worked. The first task for the team though was to restore the painting, after centuries of soot from wood burning stoves, yellowing varnish and overpaint obscured the face of the sitter, and even ink marks from “some cheeky student who had flicked his fountain pen onto the painting.”

Bendor says “we’re lucky to have a very good restorer called Simon Gillespie and we work closely on everything together. It’s got a science element to it which is fascinating because you can really burrow down into a painting which may be say 500 years old and has been looked after by dozens of people. And each one of those may have decided to tweak it and it’s like an archaeological dig. You can go down and try and get it back to the artist’s original intention. There’s a definite “wow” moment when we see the original paint underneath. For me, it’s the most exciting part, scraping away with solvents. I’d like to do it myself but Simon never lets me!

The scar on Aldrich’s face is perhaps the most significant aspect of this painting. The scar or burn is not painted in an exaggerated way but is a natural part of Aldrich’s face, and perhaps instead reveals the true nature of the sitter.

Bendor exclaims that he’s “never seen anything like it. You never see disfigurements in this period of portraiture. And to the extent that disfigurement is shown in art, the further back in time you go it tends to be a sign of someone being evil or morally bad. If you were ugly in the 16th century, it meant you were not good. If you look at a Bruegel or an old biblical scene – even a Leonardo – ugly people are the bad people.It would have been quite a brave thing to do in the 18th century to show that – obviously someone later decided to not show it and to paint it out. We know a bit about his career but we found nothing to suggest he had a scar or an accident so that’s frustrating.”

Grosvenor also worked for the Lord Chancellor on the Advisory Council on National Records and Archives, and the Lord Chancellor’s Forum for Historical Manuscripts and Academic Research. He resigned in 2018 over the government’s destruction of the Windrush landing cards, and their refusal to open the Profumo Enquiry papers. He cited his resignation with a tweet that “the government’s record management system is not fit for purpose.” He explains his role within the government advisory councils to me in more details.

“That was advising the government on secret stuff and whether historical documents should be made “un-secret”. I was always a great champion for revealing things but the government is like the Blob, they tend to be immovable and I often didn’t get very far. In fact I resigned in protest because they refused to open some papers I wanted to open. I wrote a steaming letter to the Secretary of State. The government wanted to keep all these Profumo papers secret and I thought what’s the point in that? It’s old news. But governments don’t like embarrassing people who might still be around or whose children might still be around.

“The public interest was to have the papers open and such as I have spotted any trend in public appetite for history: I think there is no trend except people are always interested in sex and money.”

I ask if he sees this in art as well.

“Yes. People like pictures of pretty people and they like pictures that are valuable. One of the things I don’t like about the contemporary art market is it reflects the fact that we’ve lost the ability to objectively value and assess art. Because we can’t look at a Koons or Damien Hurst pop painting ourselves and go “is that any good?” we tend to look for the price tag to tell if it’s any good.

“If art history shows us one thing it shows us that what’s valuable today won’t be valuable in a few generations’ time. So in a few generations time the artists from our era who will be the most celebrated will be artists who you and I have never even heard of which I think is going to be very telling on the artists who dominate conversations like Mr Koons who’s at the Ashmolean where I was today.”

I ask what makes something survive the test of time.

“First of all, it’s got to last. I’ve been to conservation studios where they’re already conserving Banksy paintings because they fall apart. Painting on cheap canvases with spray paint and household paint is corrosive stuff so it’s not going to last decades. Timeless qualities. We’re not very religious today as a society yet we still value religious art if it’s by someone like Bellini or Titian. I think it has to be well crafted, hasn’t it? And we’ve lost that ability to paint well.”

Grosvenor deals privately mostly in Old Masters, and I wonder whether he thinks people have changed over the years, and whether the concept of vanity has changed.

“I don’t think people have changed. I don’t think vanity has changed. Because the compulsion to make an image of yourself, whether that’s you or Titian taking the images is the same motivation, isn’t it. I’d like to have my portrait painted, purely out of vanity. It would be a great way to make people continue to look at me for centuries! We all want to be immortalised in paint. If I could be painted by anyone it would be Van Dyck. I’m slightly obsessed with Van Dyck. Greatest portraitist that ever lived.”

Bendor was kind enough to invite me and keen students to the unveiling of the painting in the Sackler Library, and so on one sunny afternoon we all gather to see the artwork in its restored glory. Bendor confesses himself surprised that students are interested in his programme. He exclaims, “I’m glad and surprised to hear you do! Maybe it’s Oxford. Classy people. I didn’t think we had many young viewers; I very rarely get recognised but when or if I do it’s in places like a garden centre where the retired members of the audience hang out.”

“Engaging new audiences is why I do it. Because I’m a horrible overused word: I’m passionate. I’m passionate about old masters. There’s a misconception in the art world that they’re unfashionable and that’s only because people have lost the ability to make them fashionable and interesting. That’s not to say I’m the only person who can do it. But if I have one skill in life, it’s to make what looks like a dusty old impenetrable painting look interesting to lots of people. I do it with all the zeal of a new convert. I’m evangelical about it. The other thing I’m really interested in is connoisseurship and sorting out attribution and one of my great heroes is a Rembrandt scholar called Ernst van der Wetering who says what gets him up in the morning is doing justice to Rembrandt. I think the art historian’s job is to do justice to the artist. Today, we’ve done justice to Batoni. And that’s what makes me do it.”

In recent educational reforms, the government has dropped the art history A level due to declining numbers, which I move to discuss.

“It is very strange. I invite you to read the art history A level textbooks because they’re frankly not very exciting. One of the problems with art history is that it has become overly academicized. It’s become overly theoretical and full of jargon. And if people watch our show it’s because we steer well clear of all that. It’s just about stories and people. I think one of the reasons art history is no longer taught properly is because people have lost the ability to make it interesting. It’s terrible.”

I ask Bendor how he got interested in art history, and any advice he has for the budding art historian.

“I did history at university and school – it was the one thing I was good at – and I wanted to know what the people I was interested in looked like. So I got into it via portraiture. And very often if you’re interested in the mystery of attribution portraiture is a good place to start because you get two bites at the cherry: the sitter could be wrong, or the artist could be wrong. So that’s what got me into it. What I say to art history enthusiasts is: stop reading books, go look at paintings.

“I did a careers advice session at the university to graduate art history students and only one recognised a painting by Titian. I asked what have you been doing all these years? And they said, reading. No! Go and look at paintings. See everything, see as much as you can. And take a torch.”

The Oxford episode of Britain’s Lost Masterpieces is available on BBC iPlayer now. The second and third episode air for the next two Wednesdays at 9pm on BBC Four. Bendor says that the Oxford painting of George Oakley Aldrich is perhaps his favourite they’ve ever explored on the programme.