Once queer characters were only allowed onscreen as villains, but now are free to be the good guys for a change - yet it’s always more fun to be the villain. 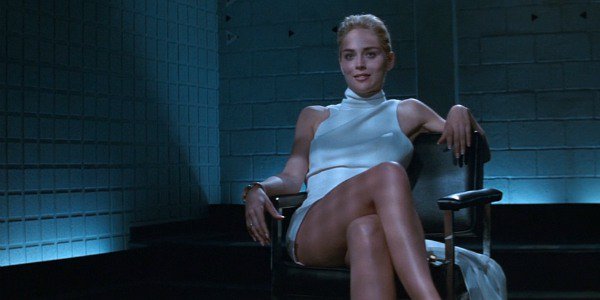 Is it an indictment of where we are in 2019 that the past was the big winner at the 76th Venice International Film Festival?

Whether it was Todd Phillips’ 1980s-set Joker, the World War II epic The Painted Bird, or Roman Polanski’s controversially included An Officer and a Spy, the silver screens of Venice were plastered with images of both factual and imagined histories this year. The winner of this year’s ‘Queer Lion’ – Venice’s award to the top LGBTQ+ film – is no exception. Sebastián Muñoz’s prison drama The Prince is set in early 1970s Chile and taps into a rich history of queer killers on screen. Perhaps less obvious or pervasive than other movie stereotypes (the effeminate and impotent gay best friend, the hypersexualised lesbian, etc.), the psychopathic LGBTQ+ maniac was a Hollywood trope which appeared frequently in the 1980s and 90s. Films like Cruising (1980), Windows (1980), The Silence of the Lambs (1991) and Basic Instinct (1992), all feature characters whose sexuality goes hand in hand with a murderous streak.

Connections between queerness and pure evil predate any of these films, however. In The Homosexual Villain, written in 1954, writer Norman Mailer acknowledged that in his early novels, he often established an ‘intrinsic relation between homosexuality and evil’. For Mailer though, the relationship between the two had more to do with narrative convenience than morality: homosexuality functioned as a kind of shorthand, an invaluable tool to simplify motivation, a signifier of deviousness which readers would immediately recognise. Screenwriters and filmmakers have even less time than novelists when it comes to creating evil characters – the time constraints of a feature film dictate that their villains are instantly recognisable. Writing for The New York Times in 1992 (the year in which no less than three of the five nominees for Best Picture featured LGBTQ+ villains), American writer John Weir identified Hollywood’s bad habit: ‘since the death of Communism, homosexual villains are fast gaining on drug dealers and investors from Japan as the new bad guys’. In the same way that it had once been safe to assume that characters with foreign accents were hiding malevolent motives, the same is now true for gays and lesbians.

Set in the gay leather bar scene of 1970s New York, William Friedkin’s film Cruising uses this backdrop to denote not just sleaze, but sin. Al Pacino plays the young cop Steve Burns, who goes undercover as bait to attract a serial killer targeting gay men within this leather community, but quickly realises that his time spent sniffing poppers and go-go dancing is having an undesired effect. Steve is shown at the start of the film having very vanilla sex with his girlfriend Nancy, as classical music plays softly in the background, but after prolonged exposure to the leather scene, Steve’s coital thrusts become more forceful, and the classical music is replaced by the sound of pounding club music in his head. He is increasingly apathetic towards Nancy, something she notices and complains about, only for Steve to reply, “What I’m doing, it’s affecting me.” Friedkin makes it easy for the audience to piece the puzzle together – as he goes deeper undercover and prolongs his exposure to the debauched underbelly of fetish clubs, Steve’s heterosexuality diminishes.

This implication on its own is enough to make Cruising a violently offensive film. What really angered the gay community, however, was the film’s suggestion that there are multiple killers, encouraging the idea that the gay lifestyle depicted onscreen was inherently violent, and that the series of murders are a natural consequence of depraved sexual behaviour. During the first murder, images of gay pornography flicker as the victim is stabbed repeatedly in the back, explicitly linking gay sex with the penetration of the knife. As a piece of cinematic symbolism, it’s not exactly subtle.

Gay audiences were naturally appalled, forcing Friedkin to include a disclaimer in the opening credits: “This film is not intended as an indictment of the homosexual world. It is set in one small segment of that world, which is not meant to be representative of the whole.” Gay activists, such as Vito Russo, were quick to point out that this disclaimer was effectively an “admission of guilt” from Friedkin. The director knew full well, they asserted, how the film would be interpreted by naturally conservative audiences, and their fear was that it would fan the flames of anti-gay violence. These fears were rapidly proven justified: Ron Nyswaner, who ironically would later write the screenplay for Philadelphia, one of Hollywood’s most sensitive depictions of LGBTQ+ people, narrowly escaped getting beaten up by a group of college students, one of whom shouted at Nyswaner and his boyfriend, “If you saw the movie Cruising, you know what you deserve.”

Largely, these monsters are now consigned to the past. Today, LGBTQ+ audiences have films like Love, Simon (2018), as well as various Netflix shows aimed at a younger demographic without the prejudices of previous generations, to confirm the validity of their experiences. Pitched firmly at a mainstream audience, Love, Simon is the polar opposite to the erotic thrillers of the previous century. In his review of the film, The Guardian’s Benjamin Lee praised the film as a ‘breakthrough moment for mainstream representation of same-sex romance’, which is undoubtedly true. To have a gay teenager as the protagonist of a major studio film would have been unthinkable up until shockingly recently. Yet I wonder whether LGBTQ+ cinema, having fought so long and hard for the license to be conventional, risks overprioritizing broad appeal. Occasionally, like Al Pacino in Cruising, you need to hear club music in your head rather than chamber music. The homicidal gays and lesbians of yesteryear are of course grotesque caricatures in one sense, but is the inoffensive blandness of Love, Simon really the preferred alternative? Whereas once queer characters were only allowed onscreen as villains, we are now free to be the good guys for a change. Yet everyone knows it’s always more fun to be the villain, especially if we’re in control of the screenplays for a change. For me, queer killers are due a comeback – surely it is better to reclaim this particular stereotype, rather than let it haunt us from the depths of history.