On hearing about the staging of Ian Flintoff’s novel Gatsby at Trinity as this year’s Trinity Garden play, I was immediately impatient to see it. The word ‘Gatsby’ instantly arouses expectations of the glamorous, glitzy, and debauched world of Fitzgerald’s masterpiece The Great Gatsby, set in 1920s Jazz Age America.

Flintoff’s love for Trinity College and Fitzgerald’s novel is apparent as he seizes the opportunity to combine them in this play.  This prequel picks up on the details of Gatsby’s dubious past from the original novel, following his journey from Manhattan to Trinity College Oxford in the post-war year of 1919.  The pizzazz I had anticipated is not exactly what the play delivers: but by no means does that detract from the performance.

The dominant atmosphere of laid-back romanticism, with moments of poignancy in the aftermath of war, is fostered brilliantly by director Imogen Edwards-Lawrence.  Sitting on the Trinity lawn as the sun sets watching Gatsby learn cricket is certainly the tonic to a demanding student day.  Any other location would have been unable to cultivate the mood of the play quite like this one and the actors pointing out the multiple references to aspects of the college, like Chapel Quad, immerses the audience entirely into the world of the play.  Special mention must go to pianist Liam Gesoff who, playing for the whole twenty-minute interval, prevents the spell from being broken.

Kevin Hulbutt (as the older Gatsby) and Alec Watson (as the younger Gatsby) had big shoes to fill, playing the mysterious and illusive protagonist in the wake of timeless portrayals by Robert Redford and Leonardo DiCaprio.   Hulbutt is consistently charming and engaging,  grabbing the audience’s attention and dominating the scene with his narrative speech.  He successfully presents the easy attitude of the character, lounging in various chairs located on the stage. Hulbutt portrays convincing nostalgia and intimacy when he speaks about Daisy and his comic timing when he assumed the role of a porter with a Cockney accent was excellent.  This is a role which allows Hulbutt to fully demonstrate his versatility as an actor and for which he deserves praise.

Watson gives us a very different side to Gatsby and he conveys the naivety of the American confused by the English culture both effectively and comically.  With less of the assumed ease of older Gatsby, Watson provides the audience with a window into young Gatsby’s state of mind as he debates on the philosophies of truth with his friend Madge, foreshadowing his later guise of deception.

Leanne Yau and Monica Schroeder provided other highlights. Yau plays the intelligent, infatuated Madge, who acts as a stand-in love interest for Daisy, with great skill.  Her solo jazz song is refreshing and alluring, the lyrics of her song ‘Baby come home’ particularly poignant in this post-war age.  References to women’s rights within the college system, however, while historically relevant, seemed a little forced in the lines of Yang and others.  Nevertheless, Schroeder makes the excessively snobby friend Johnny Cusworth an excessively amusing character.

That the script has been adapted from a novel is clear.  It is hard to translate the brief interactions Gatsby makes with the people he comes across onto the stage without it lacking a certain level of depth, and it can feel a little directionless as characters are constantly being introduced only to disappear.  Director Edwards-Lawrence deals well with what is a fault in the script by using the space to great advantage and so keeping the audience engaged.  It was a nice touch to see Olivia Popp, as Daisy, read her letters wistfully from a raised block upstage, while a bench elsewhere was transformed comically into a car by Watson and Schroeder bobbing up and down.  With a running time of 110 minutes and no real peaks and troughs of dramatic tension, however, the play could have benefitted from a cut in the script.

All in all, while the production could be tightened up, I had a very pleasurable evening as the actors take us back a hundred years on a whirlwind tour of Oxford and to an age anticipating the debauchery of the Roaring Twenties. 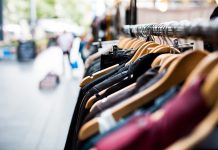 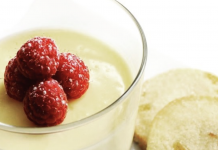 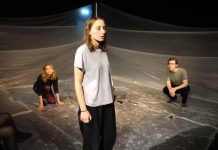 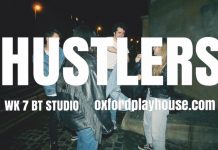 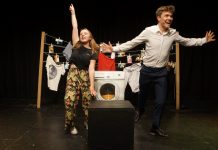 Review: How to Use a Washing Machine – ‘script and score are full of witticisms that are genuinely amusing’