Salò, or the 120 Days of Sodom: The Pornography of Power

"Pasolini uses the language and imagery of obscenity in order to shock, but if not shocked, we would only be indifferent." 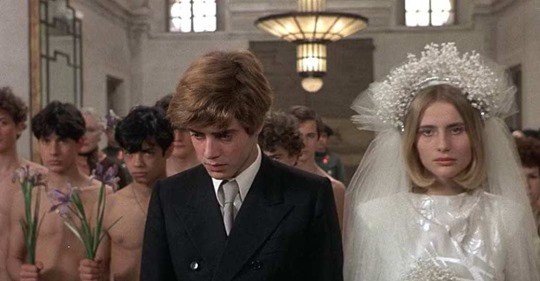 If you were to make a list of ‘trigger warnings’ for Pier Paolo Pasolini’s 1975 film Salò, or the 120 Days of Sodom, it would be hard to know where to start. Even forty years after its release, the film remains banned in several countries. The film, loosely based on the notorious Marquis de Sade’s novel Les 120 Journées de Sodome, has been branded as the “sickest film of all time” by critics. Its unrelenting look at the depravity which humankind can sink to has lost none its power to shock.

Whilst de Sade’s novel was the starting point for Pasolini’s project, the director shifts the context away from eighteenth-century France, setting the film instead in Salò, a town in northern Italy which Benito Mussolini’s Fascist government effectively made their capital from 1943 until their fall from power in 1945. The place had particular relevance for Pier Paolo Pasolini, whose brother – an anti-fascist activist – was killed there in the final year of the Republic’s existence. In the film, four Italian libertines kidnap eighteen teenagers, planning to use them purely for their own sensual indulgence, using sex and violence with complete amorality. The film follows the grim progress of these four months, and is divided into three parts: the Circle of Manias, the Circle of Shit, and the Circle of Blood – a structure alluding the definitions of Hell in Dante’s Divine Comedy. These names give you some idea of why the film has an infamous reputation within the history of transgressive cinema.

The film is one which attracts folklore, adding to the mysterious aura which surrounds the work. Legend has it that the critic Roger Ebert owned the film for years after the film’s release, but supposedly died without ever watching it, as he was too intimidated by the graphic content. During the making of the film, several reels of footage were stolen, and thieves demanded a ransom for their return. Yet most notably of all, the director was murdered before the film was even released in Italy – life seeming to mirror the gruesome content of Pasolini’s own art. A seventeen-year-old male prostitute, Giuseppe Pelosi, was arrested when he was found with Pasolini’s car. Although he admitted running over Pasolini several times with the car after an argument, many years later, after his conviction, Pelosi denied his participation in the murder, claiming that three mysterious men were involved. The case remains unsolved.

Pasolini’s homosexuality is a crucial aspect of the film’s story. As a gay communist, there was no place for him within the post-War political system of Catholic Democracy. Everything about Pasolini – his sexuality, his radicalism, his aesthetic principles – violently offended the sensibilities of Italy’s cultural and political elite. Openly despised by many, one reviewer urged that Salò be shown as a defence exhibit at the trial for Pasolini’s murder, on the assumption that anybody capable of directing such a film was practically begging to be murdered. Pasolini was uncompromising in his disdain for bourgeois convention – the film seeks to shock its audience so as to reveal the limits of their repressive tolerance. John Waters, another film provocateur, described Salò as a film about the “pornography of power” – a film which shows the gruesome reality of what happens when a desire for unadulterated sensuality meets unchecked authority.

Waters’ description demonstrates how Pasolini’s film is a work for our times. The spectacle of today’s demagogues is distinctly pornographic – images of Trump or Farage being ‘outrageous’ are the background noise of our lives now, always present even if at a low level. We have become numb to their bile, unable to feel the shock which we know should be there. One of the libertines in the film says: “All is good if it’s excessive” – they carry out their awful deeds in the name of glutting their sensual pleasures to the excess. The populist message of today is similarly in thrall to the sensual – it is a politics of carnal slogans and impulses. You don’t think through: ‘Take Back Control’, you feel it on a gut level. If Pasolini’s film speaks to our age, then it should remind us why we need works like his. We need films which violently shake us awake, forcing us to confront what we would rather not think about or pretend wasn’t there. Pasolini uses the language and imagery of obscenity in order to shock, but if not shocked, we would only be indifferent. And indifference would be infinitely worse.