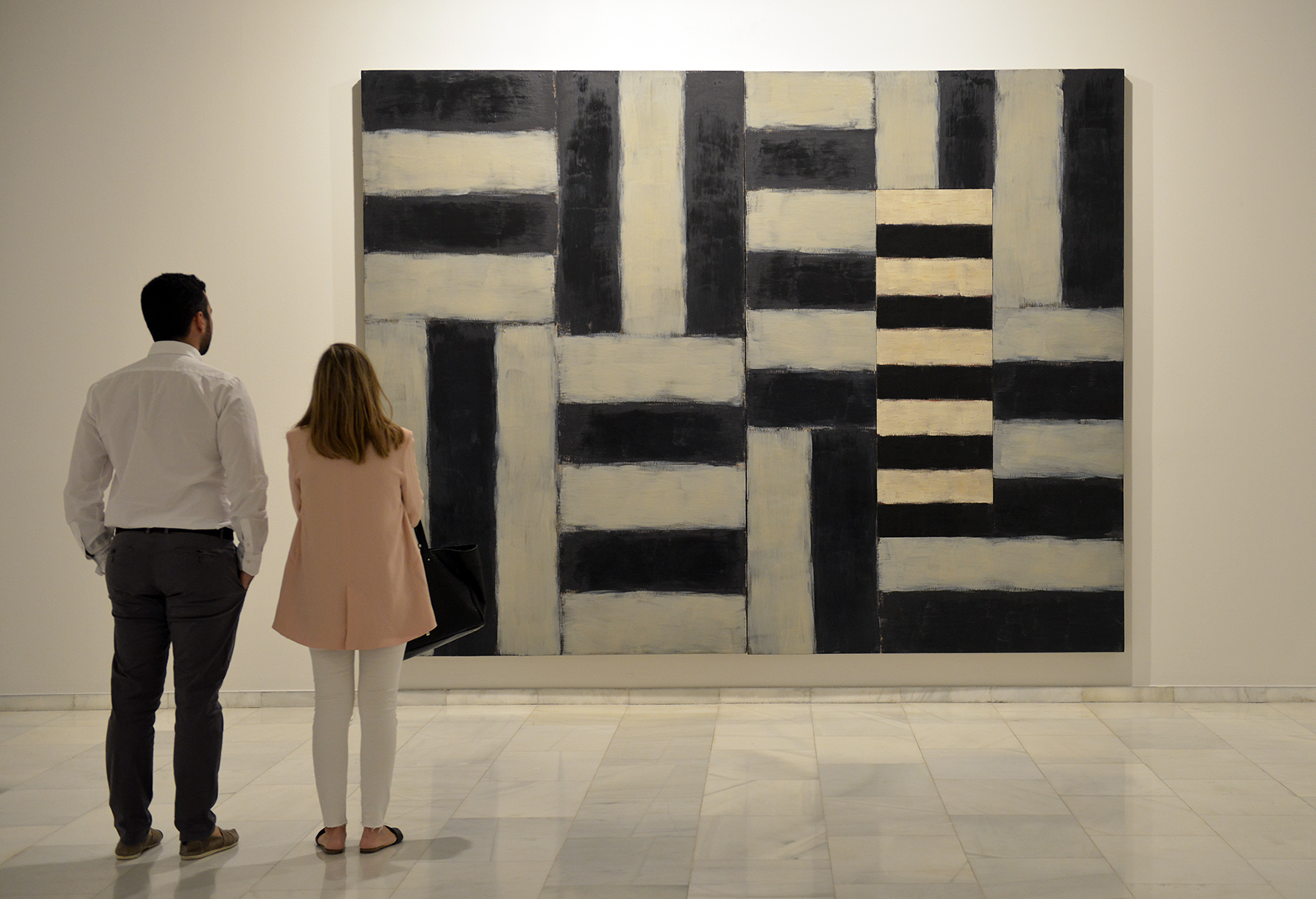 Towards the end of Unstoppable: Sean Scully and the Art of Everything (BBC4), the acclaimed artist describes himself revealingly as “the left-wing Donald Trump of the art world.” Although there isn’t much that is “left-wing” about the rampant commercialism on display, we know what he means. This brilliant film shows how Scully, like the current president, is an embodiment of self-creation, whose unbridled ego, chutzpah, and endless self-publication has helped him singlehandedly forge a place in history; but whose legacy will perhaps best be judged after the passage of time.

Although we are given some perspective on the artist, thanks to comments from critics, curators, and gallerists, the chief contributor is Scully himself. The film works by allowing us to see through the carapace of his proclaimed self-belief, his fortress-like self-aggrandisement, and his apparent indifference to the opinion of others, to reveal what he is most protective of: the fragility of his reputation and the judgement of posterity.

The film opens with split-screen images of the boiler-suited artist work in the present day, broad brush in hand and liberally sloshing horizontal stripes onto a large canvas. He stands alone within his cavernous studio. Underscored by the fifties hit ‘Softly Softly’, Scully’s very different formative years are evoked in counterpoint. Looking for all the world like a particularly aggressive plasterer (a pre-celebrity occupation he briefly held), Scully is shown provocatively as taking little care about the application of paint. His brush strokes splatter the walls either side, the effect almost echoing some bloody crime scene (he later describes his paintings as “knockabout” and “rough and ready”).

This is cleverly intercut with scenes from a 2018 Phillip’s auction in London, where the bidding for his Landline Green Sea quickly escalates to £1m. Although since the days of Jackson Pollock, we have become accustomed to disentangling notions of care, effort, craft, and time from what justifiably constitutes ‘Art’, it is nevertheless arresting to see what is apparently so casually created achieve such astronomic value. This is essentially a film biography that shows us how this trick is achieved, through Sean Scully’s performance of his artist-as-persona. The character presented to us is as much a part of the finished artwork as the pigment on the canvas.

The cameras follow Scully as he revisits the places of his infancy, from the poverty and squalor of his early years in Dublin, to teenage gang membership in Highbury, all sharply contrasted with his current day-to-day life of constant international air travel for retrospectives, sales, and general Scully PR. The self-mythologising is relentless: “from Inchicore to his own private jet”, Scully comments at one point, as if to underscore the trajectory of this narrative of hardships overcome and establishments confounded.

At the time of filming, there were fifteen exhibitions of his work around the world, and the film quotes one critic on Scully as “the greatest living artist of our time.” His undoubted success is described more than once as miraculous; there is something of the divine implied in this astonishing achievement. The film shows us that it is Scully’s drive that is most responsible for his success, and it is this Trumpian quality – this ability to promote and spin, to argue, to implacably persevere despite setbacks – that has propelled him onto what William Feaver describes as his “meteoric streak.”

The film itself serves as a career retrospective, presented as a series of artistic epiphanies. The first occurs when he sees Van Gogh’s Chair at The National Gallery, where he comments “it’s so simple even I can do it.” Much later, his predilection for stripes and grids is born after exposure to Islamic art and pattern on a trip to Morocco. Rejected by more prestigious art schools, Scully finds a place at Croydon School of Art, and is inspired by the German expressionist Kirshner.

He later moves to Newcastle University where he reports himself as more preoccupied by the space he is given – his “real-estate” – than he is with anything else. With the commandeering of a corridor at Newcastle begins his relentless desire for the monopoly of space. His frequent and generous donations to galleries (interestingly often suggested by the artist, rather than the institution), his retention of work to facilitate exhibitions and retrospectives, and even his learning Spanish in order to gain sway over Latin American markets, all speak of a desire to mark territory – to achieve dominion over it.

Above all, Scully is a salesman. He enjoys the schmoozing of openings. Unlike other artists, he’s sociable, fit (we see him still practising martial arts at the age of 73), and he charms the camera and his audiences with his down-to earth, deliberately unrarefied language (“enough of this shit” he says at one point, when he recalls his desire to “return abstraction to the people””. He is also suitably disparaging about the London art scene in comparison to the USA, where his aggression feels more at home.

But this apparent democratising instinct towards art appears to be a cover for a more hard-headed commercial savviness and a sensitivity to the fickleness of art fashion. After success in the mid-eighties, Charles Saatchi offloaded eleven of Scully’s pieces which the artist describes as akin to the dumping of shares in the stock market. Painting had lost out to conceptual art, and one critic described his work as “like very expensive wallpaper.”

Typically, Scully claims not to have cared, and feeds off the opposition to his output. He is determined to be regarded as “the greatest abstract artist of my generation” (despite the opinion of his former student Ai Wewei, who inconveniently thinks Scully’s earlier work was better than his current offerings). Through a process of clever control over supply and demand, combined with an ability to sell himself, Scully is shown to have re-made his career and reputation.

The film is strong on biographical detail but doesn’t dwell on the art itself. We are given brief ‘art-speak’ disquisitions: the paintings represent “mute eye music that finds tranquillity amid the chaos … a sounding board for the soul”, but, perhaps deliberately, we aren’t given much more on their essential artistic quality. The viewer is left to question whether this is because the life is more interesting than the work.

Is shallowness the point, particularly when we learn that the canvases are the perfect shape for an iPhone? In the end, the programme acts as an exposé of the 21st century art market, of art as a career choice or as a business, and in this way echoes Netflix’s recent satire Velvet Buzzsaw. Scully is at various points compared to Turner, Warhol, and Matisse, and yet tellingly, at no point are the more obvious comparisons made – to Rothko or Hodgkin – perhaps because such comparisons would be inimical.

William Feaver makes the most insightful comment when he describes Scully’s self-belief as based on self-doubt; he argues that Scully’s character would collapse if he wasn’t a great artist. As with Donald Trump, the observer is left to wonder at what so much front and output is really about, or what it compensates for. There is no doubt that Scully is an artistic global phenomenon – but, as the film asks and leaves open to its viewers, is his work any more than an empty expression of his own unstoppability?

Unstoppable: Sean Scully and the Art of Everything is available on BBC iPlayer. Scully’s new exhibition Sea Star is at the National Gallery until 11th August.