Williams supported the impeachment of the Librarian in his Union speech 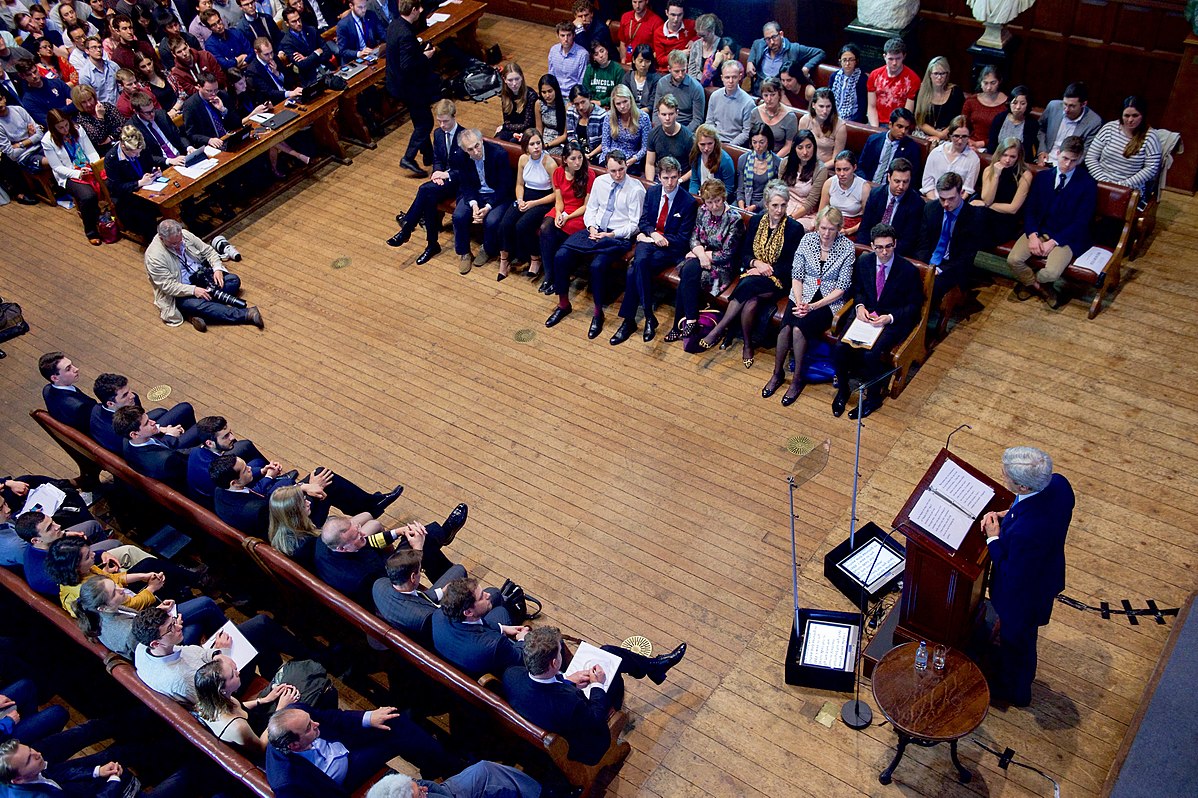 Members of the Oxford Union have called for the impeachment of Librarian, Brendan McGrath, following calls for his removal by former Chief of Staff Ray Williams, who resigned on Thursday night in protest of the Union’s decision to overturn the trial ban of slates.

Slates, the groups in which members of the Union stand for election, were banned in Michaelmas this year after a lengthy campaign. They were reintroduced in 2015 as part of a package of sweeping changes to the Union’s electoral rules, and are banned in the Cambridge Union.

McGrath raised an objection to the Union’s RO last Friday, calling for a ruling on whether the trial slate ban was invalid because the manner in which the ban was enacted was not of significant seniority in the Union’s rule-making process to overturn the 2015 rule reintroducing slates.

On Thursday afternoon, the Union’s Returning Office, Liam Frahm, issued a ruling in which he said that: “On Friday 1st February, Brendan McGrath, the Librarian, officially requested a Ruling into the validity of the trial ban on electoral pacts from MT18.”
“Having investigated the Librarian’s allegations, I can firstly confirm that the MT18 Motion was passed without either Rule 67(b)(iv) or Rule 67(b)(v) being invoked.”

He continued: “Having consulted the MT18 Standing Committee Minutes and unequivocally knowing that no requisition was posted, this Motion did not have special attention applied to it.

“Therefore, as executive seniority is determined by the method by which the Rule is introduced and the HT15 rule was passed with greater seniority than the MT18 rules change, Rule 73 requires that the HT15 rules change take precedence over the MT18 private business motion that introduced rule 33e is ruled invalid.”

(3) Other Private
Business Motions at a Public Business Meeting or any Special Adjournment Motion, as under Rule 45;

(5) The Returning Officer, for the purposes of their duty only, as defined in Rule 32(e) only;

(6) A motion of an Ordinary or Emergency Standing Committee;

(7) A motion of a Vacation Standing Commit-
tee.”

This means that the previous trial slate ban is no longer in place, and the changes made last term (including the provision for a poll of the members on getting rid of slates next term) are rendered invalid.

Williams, who was the initial proposer of the trial ban, earlier issued an objection to the Returning Officer’s ruling invalidating the ban, but this was rejected.

Ray Williams told Cherwell: “‘I would never criticise someone for merely running on or forming a slate in an election where that is legal and expected.

“The problem comes when someone tries to dupe everyone into following one set of agreed upon Rules and then blindsiding them. That’s neither fair play nor is it democratic and for me that was one dodgy Union move too far.”

In his resignation speech, Williams declared that “it had shocked me that our Librarian had seeked [sic] to subvert the express will of the membership, conning potentially dozens of other candidates to satisfy his desire for the presidency.

“I cannot continue to serve as Chief off Staff in these circumstances. I thus support the impeachment of the Librarian which is being brought before the Standing Committee as I speak.”

Williams then formally tendered his letter of resignation to the President, before exiting the chamber.

In Williams’ resignation letter, seen exclusively by Cherwell, he said “When you offered me this position, I was honoured to accepted, [sic] believing you to be, as I am, firmly committed to reform and progress in the Union.

“I had previously believe [sic] that the best way to bring about change was from the outside, but under your Presidency, I thought things would be different.

“However, the recent action of the Librarian, as reported to the press, does not only fly in the face of the democratic principles upon which the Oxford Union was founded, but also risk doing enormous damage to the Union as an institution; the relationship between its Committee and Membership; and its enduring reputation.

“I have always been a believer that slates, although not wrong in principle, in recent times at the Union have degenerated by ambition and betrayal, and have toxified our elections.

“Last Trinity, I was incredibly proud to serve as a Member of Standing Committee – elected on a manifesto pledging to push for the abolition of slates. After months of effort, we passed a trial ban last term – yet the actions of the Librarian have robbed the Membership of the promised Referendum that was due to occur.

“Given the circumstances, I cannot in good conscience continue to serve as Chief of Staff. Therefore, please accept my letter of resignation, effective immediately.

“I am confident that despite my departure the Standing Committee and Senior Appointed Officials will be more than capable with ensuring the smooth running of this term’s events, which the Membership deserve more than anything.”

The Oxford Union Brendan McGrath have been contacted for comment.