Though the opening shots suggest a John Hughes or Stranger Things-esque setting in an endearingly overlooked middle-American town in the 1980s (with a soundtrack to match), Sex Education is Netflix’s latest contemporary, explicit, and very British discussion of sex, sexuality, and all that comes with it. The eight-part series sees seventeenyear-old Otis (Asa Butterfield), the sexually inhibited son of a relationship therapist, strike up an unlikely partnership with Moorfield High’s best answer to the ‘riot grrrl’ movement, Maeve Wiley (Emma Mackey). Together, they start a sex advice clinic
for their peers.

If I were asked to sum up the show in one word, it would almost certainly be explicit. Nearly every single one of the episodes opens with a sex scene of some variety, including straight up full-frontal nudity. Since its debut, it’s no surprise that a central talking point has been the appropriateness of the content for the intended audience. Taking pride of place on the streaming service’s front page alongside comparatively innocent teen shows such as Riverdale and Pretty Little Liars, the potentially affrontive nature of the show in relation to its target audience has been the topic of many headlines.

It refuses to conform to the tiring tradition of sugar-coating anything that sits outside the realm of the PG-13, and this refusal makes it the relatable and refreshing show that it is. In their clinic (in reality, an abandoned, asbestos-filled toilet block), Maeve and Otis confront issues that are prevalent in young adults, removing the taboo and encouraging honest, open discussion. Combining these hard-hitting topics with some of the most quotable one-liners of recent times (see “she touched my eyebrows, and now I have an erection”) is what the show does best.

Aside from the issues directly tackled by Maeve and Otis in the clinic, the show shines in how it addresses the wider experiences of real teenagers. This is poignantly done through the character arc of Eric (Ncuti Gatwa), Otis’ best friend, and a victim of both verbal and physical homophobic attacks. His character arc sees him tackling these adversities as well as the pressures from his religious family. We also see the status quo being challenged through Maeve’s character. She is labelled a ‘slag’ and a ‘cock-biter’ by her peers, yet seems utterly unshaken in her sex positivity, reinforcing the revolutionary idea that women can actually enjoy sex too. In the second episode, Maeve falls pregnant and makes the choice to have an abortion. Instead of making this the focal point of her character arc, Sex Education does not let this define her. All the while, the topic is handled with great sensitivity, as an issue that is faced by women from all backgrounds and walks of life. The issues are breached with a comforting sense of normality, providing an honest and real exploration of the issues that many of its contemporaries push under the rug. It is welcoming that such a diverse and meaningful show is taking centre stage, reminding us that in whatever circumstance (really, whatever circumstance) we find ourselves in, we all need to “own our narrative” a little bit more. 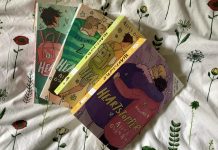