David will be captain for the forthcoming 2019 Varsity campaign 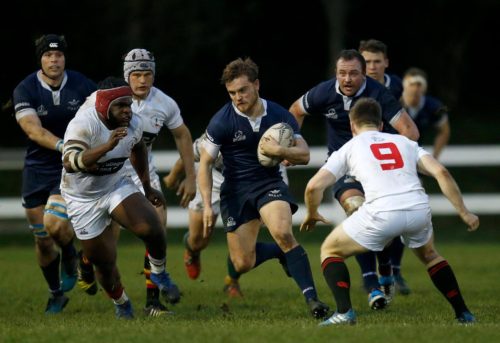 The OURFC Men’s Blues have announced the election of Ed David as captain for the forthcoming 2019 Varsity campaign.

The St Hilda’s student replaces Dom Waldouck with immediate effect and will take the reins for a set of Hilary term fixtures that includes an away clash with Bristol University next Wednesday, as well as home matches under the lights at Jackdaw Lane against the Navy, Welsh Crawshays, and the annual visit of the touring side HSBC Penguins.

A statement on the Blues’ website refers to David’s first year with the club, in which a string of eye-catching performances in the Whippets, underlined by an “85 metre solo try”, and Under-21 Varsity matches earmarked his early potential as a match-winner at Twickenham. A debut in the starting XV soon followed against the Army in Hilary Term 2015.

A 5th year medical student, David is now already a 3-time Blue and made his debut in the Twickenham showpiece from the bench in the 12-6 victory over Cambridge in 2015, at the time a record-breaking 6th consecutive dark blue Varsity success.

Since then, things have not always gone the way the winger may have hoped when he initially burst onto the scene. Playing at 14 in the 23-18 reversal in 2016 and the 20-10 loss last campaign, David has tasted defeat in both Varsity starts to date and has therefore experienced both sides of the emotional outpouring upon the final whistle. A sour note at the time, it is these disappointing days that ultimately fuel the desire to come back better, and that stand him in good stead to convey the true meaning of a victory on the day.

Oxford regained their Varsity crown this year with a slick attacking performance, putting Cambridge to the sword 38-16 in a match defined by powerful carries and puncturing offloads as the light blues were stretched in the second half. Wingers Tom Stileman and Danny Barley, on debut, both went over in the corner, but David was forced to sit out the occasion after dislocating his shoulder in the high-quality warm-up contest against the Canadian International side a month earlier.

Once he realised the injury couldn’t be overcome, one teammate tells Cherwell, he selflessly placed the team ahead of his own agendas, a facet of his off-field personality that was key in the decision to vote for him.

The handing over of the captaincy took place in the Pavilion off Iffley Road on Monday night, a congregation of the 24 matchday Blues from December, in which each of the candidates, David and two opposing others, were required to provide a speech detailing their vision for the club, as well as their qualities and approach to the game.

That David succeeded, is a superlative show of faith from his team-mates despite his injury setback, and also conversely a reflection of the magnanimous way he has handled the cruel blow: “He [David] gave a very candid speech and everything he said was very genuine and the ideas for the club he had going forward were fantastic. He also stands out for his playing ability as he is definitely one of the most consistent performers, and despite his injury early last term he made every effort to firstly get back to fitness and secondly, once he knew he wouldn’t make it, put everything into the campaign as a whole, and definitely put the team ahead of his own agendas.”

The 2019 Varsity campaign marks the 150th anniversary of the Oxford Uni Rugby Club, founded in 1869, and the team will embark upon a journey to Japan in September to compete in the World University Rugby Invitational Tournament, commemorating the landmark year.

A full list of OURFC captains can be found here. The Women’s Blues captaincy will be decided at the back end of Hilary Term.