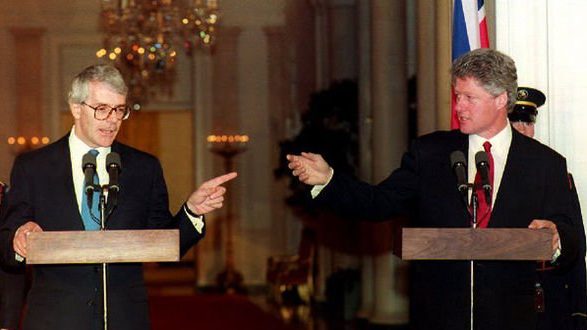 During the 1992 US Presidential Election campaign, rumours circulated that Clinton had applied for UK citizenship while studying at Oxford to avoid the Vietnam draft.

Despite a Home Office investigation proving the claims groundless, the press coverage –reported in The Washington Post on December 5, 1992 – proved deeply embarrassing for Major.

“I am disturbed by reports which have appeared about enquiries by our Home Office relating back to your time at Oxford,” Major wrote to Clinton on December 6, 1992.

“I am only sorry that it has been played up now in a mischievous way. I hope the mischief will be short lived.”

The incident further strained relations between the Prime Minister and President-elect Clinton, after two Conservative Party strategists had travelled to the US weeks before the election to advise Republican candidate George H.W. Bush.

Rumours of Clinton’s ‘draft-dodging’ were used by opponents to question his legitimacy during the election. The US State Department conducted a search into Clinton’s passport files but found no evidence for the claims.

Major clarified, “What happened, as I hope [British Ambassador to the US] Robin Renwick will have explained to your people, is that during the campaign our Home Office were asked a number of questions by journalists about whether you had applied for British citizenship while in this country.”

“In accordance with their normal practice, they refused to make any on-the-record comment but, having checked the facts, they sought to guide the press on a background basis that there was absolutely nothing in the story.” The Washington Post mistakenly published the Home Office quote on-the-record, embarrassing Major.

Tony Blair, then Shadow Home Secretary, criticised the Home Office’s investigation. It’s “not just an error of judgement,” he said. “It can’t exactly help our relations with one of our most powerful allies.”

The files – released at the National Archives at Kew on December 28, 2018 – showed no personal response from Clinton. A potential December 1992 meeting was also rearranged for 1993 in a move the Washington Post called a “political snub.”

Their next correspondence was another letter from Major on January 19, 1993, the day before Clinton’s inauguration. “Norma and I send you and Hillary our best wishes for your great day tomorrow and for your success and happiness at the White House,” Major wrote.

In response, Clinton telephoned Major at 6.30pm the same day and they ‘spoke for about 15 minutes.’ Major said ‘he hoped the President would come over to Britain again.’

Clinton responded, ‘he and the Prime Minister would need to meet soon but, apart from that, he would like to make a sentimental journey to England, including Oxford, at some point during his term.’ They went on to discuss policy regarding Saddam Hussein’s Iraq.