I’ve never before experienced a moment of complete awe in a theatre before. A lot of plays in Oxford are thought-provoking, some are shocking, but never before have I seen an entire audience completely stunned into silence by a moment of pure dramatic brilliance. This moment came at the end of Blood Brothers, Willy Russell’s seminal musical, which has now been running for over 30 years in the West End and on tour.

In truth, it was a moment the audience had been anticipating from the off. The play begins with a prologue, in which the sardonic narrator tells us that we will hear the story of the Johnston twins, “who were born and who died on the self-same day”, and the advertising makes no attempt to hide the tragic climax – the poster outside the New Theatre even shows two men lying on the ground. The fact that you could hear a pin drop, in an audience packed with nearly 1,800 people, is testament to the sheer excellence of the production, which was outstanding from start to finish.

Blood Brothers tells the story of Eddie and Mickey, two twins separated at birth, and the contiguous lives they lead as one is raised on a council estate in Liverpool, and one goes off to university before becoming a politician. Although the story is about the Johnston twins, the play begins with their mother, who aged 25 is a cash-deprived single mum trying to raise seven children alone. After falling pregnant with twins, and threatened with having to send some of her children into care, Mrs Johnston makes an agreement to give one of the twins to the upper-class (and infertile) woman, whose house she cleans, to raise as her own. When the two children meet by chance and become firm friends, their two mothers can do nothing to keep them apart, even as their lives unfold in completely different directions.

It is a strength of the lead actors that they are able to play their characters as young children in the first half as convincingly as they are able to play their adult selves in the second half. Exceptional range is shown particularly by Sean Jones, who plays Mickey, whose command of vocals and ability to transform his stature is completely mesmerising. There is not a weak link in the cast, with the supporting roles often adding in some exceptional moments of meta-aware comedy (“I was your milkman, now I’m your gynaecologist” is how the production explains one of the ensemble multi-rolling in the same scene).

The stand-out role, though, is Mrs Johnston, played emotively by Linzi Hateley, and it is highly refreshing to watch a play with an older woman in the central spotlight. Mrs Johnston’s transformation from hopeful housewife to bereaved survivor is the core tragedy of the play, and it is an added note of the sardonic that we never find out her first name – she is only ever “Mrs Johnston” or “mum”.

In addition to the superb cast, the technical team behind the production have done an excellent job. The frequency of the set changes, and the use of highly ambitious lighting (including gauze) from Nick Richings, make for an urgency of tone that keeps you on the edge of your seat throughout, and the live orchestra bring Willy Russell’s exceptional score to life with vigour. It is clear to see why Blood Brothers has won every major Olivier Award.

The real draw of this play, though, is its message. Blood Brothers isn’t subtle about its presentation of class difference, but nor is it preachy, and the conceit of the parallel lives of the twins makes for some heart-wrenching moments of pathos. These work to demonstrate that nurture is everything in the nature vs nurture debate. Some particularly droll moments are the scene in which we are shown the boys in the classroom, which begins by satirising private schools, with Eddie, in his cricket gear, being grilled about his Oxbridge aspirations by a headmaster in a gown.

The same cast member then plays the scruffy teacher who takes a much larger class in Mickey’s underfunded state school, suspending Mickey for not answering an obscure question about geography that neither the teacher nor the students are at all invested in. The second moment comes when both boys are arrested for throwing stones; after returning them home a police officer warns Mickey’s mother to keep her son under control at all costs, before taking some whisky with Eddie’s father, and warning him to keep his son away from the riff raff. It is notable that both of these scenes depict the attitude of the establishment towards class, but it is also notable that both are unabashedly humorous – and indeed, Blood Brothers is a play that is consistently funny right up until the point of tragedy.

This is a play that debuted in 1983, but is as topical and relevant for 2018 as if it were written yesterday. The fact that the entirety of the New Theatre gave a minute-long standing ovation is testament to the calibre of the production, which draws you in with its endearing characters and tongue-in-cheek humour, before leaving you in tears as the curtain falls. Powerful, moving, and compassionate, this is truly exceptional theatre. I cannot recommend Blood Brothers highly enough. 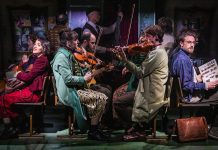 Review: Amélie The Musical – ‘a story of relentless optimism’ 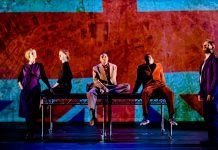