What is the appeal of music that makes you feel uncomfortable? Does it allow the listener to explore aspects of themselves which lie hidden in their day-today lives? Does it provide a sense of emotional release from the dull normality of work and family? Or is it just fun to shout the house down every once in a while?

For Swans, an experimental rock band playing out of New York, conveying a sense of profound threat is at the heart of every record they put out. With grand, reverberating guitar riffs and percussion ostinatos rising and falling with an oceanic swell beneath the texture, it’s hard not feel a little ill-at-ease.

Michael Gira started Swans in 1982. After receiving critical acclaim for the raw and abrasive sound the band fostered, and after releasing ten albums in fifteen years, the band broke up. The band’s early work drew on a wide range of influences, including grunge, punk, and metal; it garnered a dedicated, if small, community of fans. After some thirteen years of hiatus, Swans got back together. Gira said that he, after To Be Kind performing a song ‘The Provider’ by Angels of Light, the band he formed after Swans, felt “a nascent urge right then to re-form or reinvigorate Swans because I remembered how elevating and intense that experience was”.

There have been four albums since Swans’ reformation, including . The project is probably the most intense I’ve ever heard. At two hours in length, boasting a ten-song tracklist, the album packs a kind of punch most bands don’t even dream of. The central track on To Be Kind is called ‘Bring the Sun / Toussaint L’Ouverture’. At a little over 34 minutes, ‘Bring the Sun’ includes extended sections depicting sun-worship and stretches featuring Gira shouting the name ‘Toussaint L’Ouverture’, the best-known leader of the Haitian revolution from the late 18th century.

Gira’s textures, always dense and overwhelming, incorporates the sounds of wood saws and horses galloping, and voices shouting in French and Spanish; synths wail and build to a point where the timbres reach complete incomprehensibility.

It’s hard to listen without shivering a little, or wanting to start a fire in your college accommodation whilst sacrificing livestock to the devil. On ‘Just a Little Boy’, Gira whines above an ominously lilting bass-line; some four minutes in, he sings – or more accurately, groans – the phrase ‘I’m just a little boy’, with a high-pitched, maniacal voice.

It’s the stuff of nightmares – deeply and distortedly unnerving. But across their grand maximalist textures and hypnotic minimalism, and their quasi-meaningless lyrics, all that Swans are really trying to do is get beneath your skin. It’s safe to say that they succeed.

There’s an aspect of art this arrestingly complex that demands total focus. Easy listening music is aptly named; and so is hardcore. It is rarely a fully enjoyable experience to listen to a band like Swans. But, every once in a while, it turns out to be a rewarding one. 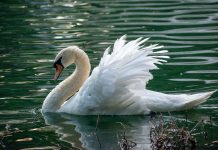 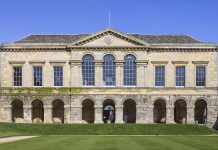