A peer support network for male athletes with eating disorders has been set up in Oxford by a graduate of St Edmund Hall. Hillary Reitman, who graduated in 2013, decided to begin the scheme after supporting a close relative who experienced bulimia whilst representing Oxford University at a Blues level.

The initiative, Supporting Male Athletes with Eating Disorders (SMAED), aims to break down the barriers of `toxic masculinity` by providing a network of support for athletes with eating disorders.

Hilary and her relative told Cherwell of their experience of the battle with the disorder. They discussed the impact of coach and team pressure, with coaches discussing `race weights` and making clear the link between food, shape and performance. The competitive
nature of the team meant that there was a hierarchy of ability, and falling lower down due to eating would lead to a vicious cycle where you were pushed even lower. No-one spoke of
life outside the sport or mentioned personal mental struggles.

They told Cherwell of the struggle of living as an athlete with an eating disorder like bulimia, saying that it is a very lonely experience, and that they only spoke to one other
male sufferer in a decade. Despite some famous sportsmen, such as Freddie Flintoff and Nigel Owens, speaking about their experiences with bulimia, they feel that this isn’t particularly helpful in day-to-day life.

They told Cherwell that the aim of SMAED is to “do our part in breaking down the barriers of toxic masculinity by building a peer community of support for male athletes with eating disorders, starting here in Oxford, with the ambition to develop peer support communities nation wide.

“Through our peer communities, we will encourage an openness of dialogue, battle the stigmatisation of eating disorders in men, more broadly, and male athletes particularly.

The pair emphasised that they “aim to make the general public aware that male athletes get eating disorders. Whilst we absolutely recognise the benefits that sport can bring to
peoples’ lives, we aim to educate the public about the potential development of eating disorders in men participating in elite and other sporting environments.”

In creating the network Reitman has created the email [email protected] for people who are interested in connecting with those who may have similar shared experiences. 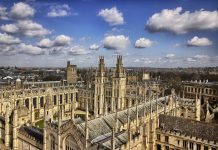