CherwellIndependent since 1920.
Comment Kevin Rudd: ‘An apology without a strategy would have been a hollow... 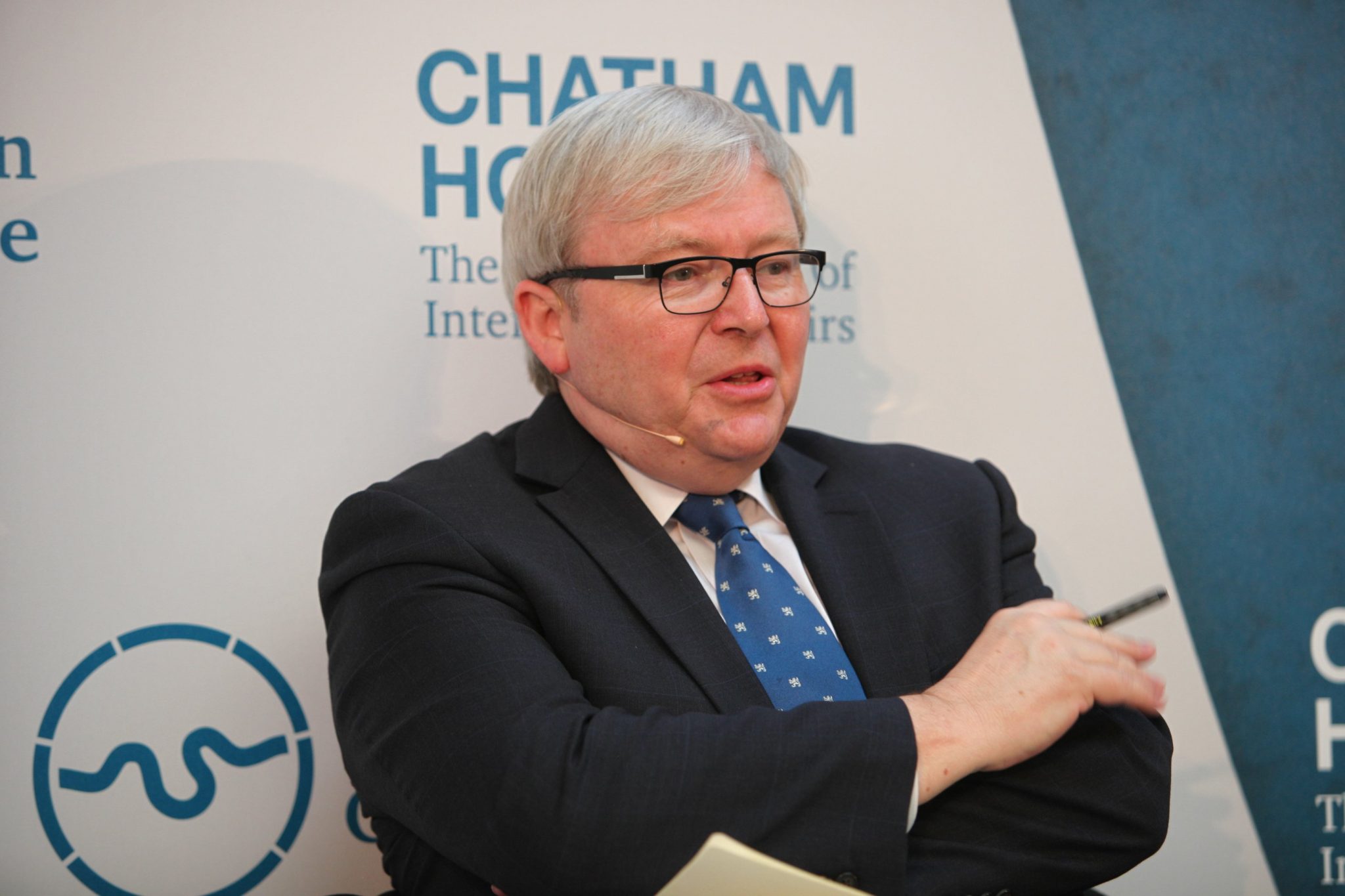 On the 13th February 2008, during my third week of school in Australia, we stopped class. One of the teachers wheeled in an old television on a trolley, and we were told to listen as the Prime Minister, Kevin Rudd, publicly apologised to the ‘Stolen Generation’ for the first time. As a recently emigrated English kid, I had no idea about Australia’s indigenous people, let alone that the government sanctioned theft of Aboriginal children that left tens of thousands of communities reeling. But even then I sensed this was a big moment. As I grew up in Australia, studying Aboriginal history, it became more and more clear that this day held, and will continue to hold, significant place in Australia’s reconciliation.

With this in mind, I tracked Rudd down in Oxford, and asked about the ‘sorry speech’ ten years on. We meet in the China Centre where he’s currently studying. “So you’re the PPE student from central casting?” Yep, thats me. “At least you’re wearing proper shoes.” I’m wearing my RMs, practically a uniform of Aussies everywhere. It goes without saying, he’s wearing them too. Inquiring into his PhD project, Rudd says matter-of-factly: “the worldview of Xi Jinping, whether it represents a change for China or, if its a continuation, to what extent.” He adds a more candid description: “basically whether or not we’re fucked.”

Since he follows in that tradition of Australian Labor leaders who don’t mince their words, it can be easy to forget that Rudd began his career as an Australian diplomat to China. I asked Rudd to explain, free of political jargon, exactly what he was apologising for.

“There are two aspects of the entire systematic mistreatment of Aboriginal Australians by white settlers over a couple of hundred years, where literally white Australians treated their Aboriginal brothers and sisters like shit. And there was a policy in the late 19th and early 20th centuries of forced separation. That is literally taking the children off parents and mothers, into state run orphanages, or to foster them out to white families. It was all part of a policy at the time to, in effect, breed out of existence aboriginal Australians”.

Between 1910 and 1970, the Australian government sanctioned the indiscriminate removal of over 20,000 indigenous children, a policy which has contributed to the dispossession of Aboriginal people from their land and culture. It also led to the enormous disparities in health, education, and employment as compared to non-indigenous Australians.

I wanted to find out from the man who initially raised my awareness of this situation, how he remembered learning about it for the first time. “I grew up in a town which only had one indigenous family, and what I noticed from that experience was that other families did not allow their kids to play with the Aboriginal kids. My mother insisted on being different. My mother was not some university educated social progressive, she just thought it was indecent. So we would be regularly playing with Aboriginal kids.” Moving on to University in Canberra the absence of indigenous representation was striking, and then, working for the Queensland government drafting its first land rights legislation in 1990, Rudd got a shocking view of the scope of the issue.

He has received criticism for his apology being nothing more than political symbolism, but thinks this is short-sighted. “It’s rare for me to run into an Aboriginal Australian who doesn’t bring it up as something positive in their lives. Why? Because symbols matter in people’s lives. Feelings matter in people’s lives.” He explains he made it his first act in Parliament “because there’s nothing more fundamental to a country than what I describe as the country’s unity’. He’s quick to emphasise the link between recognition of a problem and action. “When you’ve had such a history of blatant racism towards black Australians then you can either pretend it wasn’t a problem, or you can pretend it was someone else’s fault, or you can pretend its all fixed up anyway, or you can deal with it.”

Rudd further stresses the importance of the Closing the Gap strategy and the funding provisions his government established soon after the apology: “an apology without a Closing the Gap strategy would have been a hollow gesture. One without the other is bullshit.” So with ten years since the speech, what exactly has the progress been in indigenous development? After establishing seven measures relating to health, housing, and employment, to ‘close the gap’ between indigenous and non-indigenous Australians there has been, in Rudd’s words, “some success, some failure, some standing still.” He’s quick to note that this is still a lot better than where were at in 2007. “Let me give you and example.

One [target] is that every indigenous child, by the time we got to 2015 would have access to early childhood education and we have now achieved that for about 95% of indigenous kids. Tick. Another one we established is that we should halve the gap between indigenous kids and non-indigenous kids on year 12 completion rate, were on track to doing that.” Some areas, he notes, have “become bogged”. The tenth and most recent Closing the Gap report, the Human Rights Commission made it clear that some targets are far from being achieved.

In fact, the life expectancy gap is actually widening due to improvements in the non-indigenous population. “One of the reasons is that the conservative government for the last four years its been in office has systematically started to rip funding out of the system… You can have policies on the ground to make it happen, but if the feds, in Australia in this case, pull the funding rug from underneath it…” he trails off, “no-one’s a magician, you can’t just do that.” I point out the Human Rights Commission’s frustration at the lack of a coherent strategy to deal with glaring problems.

“If our successor governments, the conservatives, pull the funding rug, well things come unstuck and the Human Rights Commission is perfectly right to launch its own criticisms about whats not been delivered.” Rudd is frequently critical of his successors in government, the Liberal party – Australia’s version of the Tories. I’m curious as to Rudd’s opinion on whether they are stymied by pernicious racism, or just weak-willed. “What I’ve found, at least in my own country, Australia, is a predisposition to use the race card either against immigrants, either against muslims, or either against indigenous australians to generate an us versus them psychology. In other words it becomes a political tool in the hands of unscrupulous conservatives the world over.”

He doesn’t think the current Prime Minister, Malcolm Turnbull, is a ‘neanderthal’. But he is clear about his avoidance of responsibility: “on race questions leadership means you lead, the alternative is you follow. You follow racists or you lead people out of racist sentiment.” The most recent, high-profile dismissal of Aboriginal concerns came when Prime Minister Turnbull immediately rejected proposals put forward by the Uluru Statement From the Heart last year. This drew particular criticism from Rudd.

The statement from the heart suggestions are limited to establishing a small number of advisory and mediating bodies with the aim of an Aboriginal voice to contributing to policy making and reconciliation efforts. He takes a very dim view of Turnbull’s knee-jerk reaction to this. “The first thing the Prime Minister of the day should do is listen to it with respect rather than just slam the door shut in their face”. He addresses Turnbull directly: “Malcolm, it’s about time you did something fundamental to deliver reconciliation instead of just giving the finger to aboriginal people meeting at Uluru.”

Four years after leaving office, Rudd’s fervour for the aboriginal issue seems undiminished. Taking time out of his PhD, and engagements with the international political community, to give a series of speeches and to pressure the government into action, it’s clear that he’s passionate about finishing the work he started in office. As we finish up he makes yet another call on Malcolm Turnbull to re-consider the Uluru Statement: “re-open up again, otherwise” he concludes “the next Labor government will do it for you.”