The required threshold of 20 members stood to suspend the debate, leading to protests outside the Sheldonian 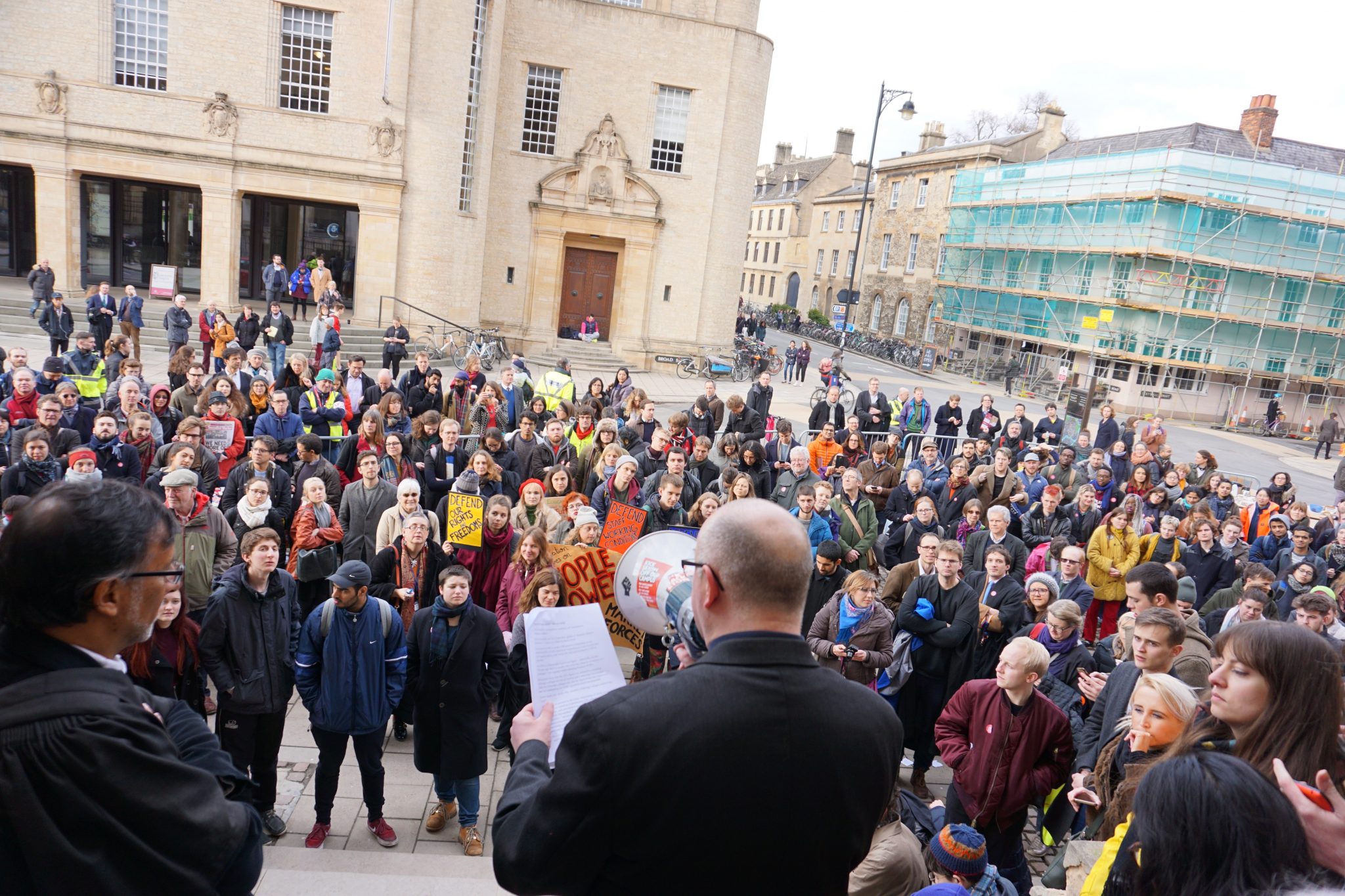 Jack Hunterhttps://jackrhunter.com/
Jack Hunter was the editor of Cherwell in MT17. Follow him: @_jackhunter or email [email protected]
6th March 2018

Oxford dons have vowed “we’re not done” after some members of university management successfully blocked a vote on pensions at Congregation today.

A resolution to reverse Oxford’s position on the USS pensions scheme was narrowly defeated in a meeting of Congregation, Oxford’s governing body, as the required threshold of 20 members stood up and suspended the debate.

The move was met with anger by the majority of staff attending the meeting at the Sheldonian. A group of around 20 left the meeting in protest, with one saying “it’s a disgrace”.

Congregation took place amid a demonstration of around 150 students and trade unionists in front of the Clarendon Building. During the meeting, the demonstrators chanted “let them vote”, “do not stand”, and “sit back down” in an effort to sway the decision.

In an unprecedented move, after the decision to suspend the meeting, dons in attendance held a symbolic vote in support of the resolution outside in the Old Bodleian library quad. The resolution passed by 418 votes to two.

Proposers of the resolution then read out speeches on the steps of the Clarendon.

“VCs no longer come from colleges but some global bank of VCs who seem to have been specially trained in the Dark Arts they need to do their job.

“And what is that job? It seems that it is to sell the university brand and defend their own interests while holding down academic pay, casualising academic labour, and axing academic pensions.”

Balliol College fellow, Sudhir Hazareesingh, said: “I think everybody not only in this university but in all other universities, have been been shocked by Oxford’s leadership on this.”

Numerous figures in attendance at the meeting claimed the 20-member threshold to block the debate had only been narrowly met after several recounts.

Who were the 21 members of the university who stopped members of Congregation from reversing Oxford’s position on the #USS? #OurOxOurUni #JeezLouise

The move followed interventions by Richardson and department heads to encourage the meeting to be suspended until the start of Trinity term.

Administrative officials argued this would allow the debate to take place after the consultation period on the USS had ended, and members could have “cleared their diaries”.

In her latest email, Richardson told Congregation members she had been “disheartened these past few days by the tenor of some of the debate” over strike action.

President of Oxford UCU, Garrick Taylor, told Cherwell: “Oxford UCU are hugely disappointed that management blocked the debate and vote in this way.

“This shows the gulf that has now opened between academic and academic-related staff at Oxford and senior management.

“As the unofficial vote outside showed, had the resolution been heard, it would have clearly carried.

“I’ve already had attendees express that because of management’s actions at congregation they are now going to join the strike.

“Members are angry, very angry. Oxford changing its view towards risk could have helped the industrial dispute come to a quick end, and we could have all gone back to work.

“The amount of student support for staff today was incredible, and shows the solidarity between staff and students is as strong as ever.”

In a statement, Oxford SU said: “Oxford SU is extremely disappointed that the motion on the future of the USS pension scheme was not heard at Congregation today.

“It is also disappointing that the Vice-Chancellor herself was not present to hear the voices of staff and students at today’s meeting.”

Vice Chancellor Louise Richardson @UniofOxford pretends to care about free speech on campus but has shown her hand through the shameful, anti-democratic shutdown of the Congregation vote on the #USSstrikes

Oxford SU President, Kate Cole, said: “A small selection of the management of our University successfully organised to block our democracy, and as a result a group of members of the supreme body of this University were not allowed to have their voices heard.

“Student observers may have been barred from the room against precedent, but they showed their support in their hundreds on the steps of the Clarendon building, and they have been showing their support on the picket lines every morning.

“The student voice on this issue is loud and clear – we stand in full solidarity with UCU.”

Oxford SU also noted they would be writing to the vice chancellor to express their disappointment.

The University of Oxford did not comment further on today’s events.