OUAFC has told college footballers to stop relieving themselves outdoors in University Parks, or their team will face a ban from the premises.

The club’s sabbatical officer, Omar Mohsen, asked college captains to discourage their teams from public urination following complaints by the pitches’ groundsmen and the University’s Director of Sport.

“It feels slightly surreal to be writing this email, but I have been told to tell everyone not to relieve themselves in the relatively open spaces of Uni Parks, and instead use the toilets
provided,” Mohsen wrote in an email leaked to Cherwell.

“Apparently, if the wrong people see you doing it and report you, colleges can be banned from the premises, and football in general may be threatened with not being allowed to use the facilities of the Parks.”

While the prospect of whole college football teams being banned may seem unlikely, there is a recent precedent for it. After anti-social behaviour during the club’s ‘Welcome Drinks’
event, Durham University’s Castle AFC were banned from participating in the rest of the 2017/18 college football season. Complaints were made after players exposed themselves to members of the public after stopping a car at a zebra crossing, and made inappropriate
comments to two female students in a college bar.

University Parks plays host to several games a week, with Teddy Hall and Regent’s Park  both considering it their home ground, and the University third team, the Colts, often
play there.

Passing on Mohsen’s message, Corpus Christi captain Jack Counsell reminded players at his college in an email that “only bears shit in the woods, and only dogs piss in the park.”

Exeter Reserves captain, James Sharples, told Cherwell that he planned to “explain the rights and wrongs of public urination” to his side ahead of their next fixture at the venue.

OUAFC did not reply to Cherwell’s request for comment. 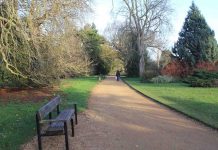