Voting on an OUSU All Student Consultation on the student union’s policy on scholars’ gowns in examinations opens today at 12:30pm, after a narrow vote by OUSU Council in 7th week. Polling will remain open for two days and will be solely advisory.

OUSU Council narrowly voted to go to an All Student Consultation on whether OUSU should oppose the wearing of differential gowns in examinations during the 7th week Council meeting, in response to a motion put forward by Wadham students, Matilda Agace and Isobel Cockburn, to end the wearing of scholar’s gowns in exams.

A motion was already passed in Trinity term 2016 to ban the use of scholars’ gown in viva voce oral examinations, in order to reduce bias if examiners notice the gown.

The results of the consultation, along with the original motion, will be discussed and voted on in 1st Week Michaelmas Council. The poll is only a consultation, and the results are not binding.

The motion cites several reasons for ending the wearing of differential gowns, including that those without scholar’s gowns can feel “stressed, uncomfortable and inferior to their peers”. The motion also notes that “Oxford is the only university in the UK to have differentiated gowns in exams”.

If the motion passes in Michaelmas, OUSU sabbatical officers will be mandated to lobby the University to change the current system. It would also become OUSU policy to oppose the wearing of differential gowns in examinations.

As a response to those who consider it ‘radical proposal’, Cockburn also told Cherwell: “subfusc is still worn and, as was argued at the 2014 referendum, it can act as an equaliser. Separate gowns act in opposition to this, creating a visual demarcation on often relatively arbitrary results.

“This is not an attempt to discourage people from celebrating their academic achievements; when you are awarded a scholarship, you are given both prizes and the title of a more academically able student.

“Of course scholars should be able to celebrate their academic achievements—but not at the expense of others.”

One student, Selma Stearns, told Cherwell: “I personally felt uncomfortable wearing my scholars’ gown because it felt showy and unnecessary. Everyone going to the exam has worked hard, and separating us based on results from another set of exams in another year seems arbitrary and elitist.”

Other arguments listed on the OUSU website in favour of the motion include the impact of the extra confidence given to scholars, and that “prelims results are more of a reflection of a student’s educational background than their grade in Finals”.

It has proven to be a divisive issue amongst students. One student, Tom Ash, told Cherwell: “I think by focusing on the gowns you’re scapegoating something which is not the most pressing issue in the system of inequality in Oxford, and getting rid of an important incentive for working in first year.”

Arguments have also been made regarding the undiscussed impact on choral and organ scholars. One organ scholar, Julia Alsop, told Cherwell: “You join the University as a scholar and student and they are intertwined—as such it diminishes us if we are not allowed to equally take our exams in the same way we experience our whole university life: as both scholars and students.”

Another student against the motion, Anna Lukina, said in a recent blog post: “Oxford [is] a place built on academic excellence—shunning rewarding it here seems absurd, especially since most current students have been accepted to this university by virtue of performing better than their peers.”

Regarding the inequality arguments put forward in favour of the motion, Lukina wrote: “The cost of gowns and disparities between different colleges in terms of scholarships/exhibitions are easier to address and will arguably make more positive impact.”

Arguments noted on the OUSU website against the motion include the impact of incentives to work hard, the long-lasting nature of the tradition, and the importance of rewarding academic excellence.

Students will have the opportunity to vote in the non-binding poll until 12.30pm this Friday. 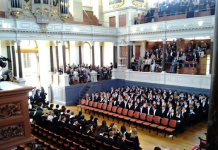