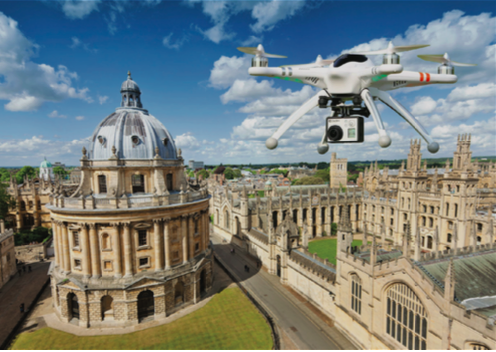 Members of the Wadham Student Union (SU) have remained tight-lipped about plans to buy the College a drone using money won from voter turnout figures in last week’s OUSU elections.

Last Sunday, Wadham debated a motion at its SU meeting, proposed by the President, Lucas Bertholdi-Saad, to buy the college a drone because “they are cool and have popular support”.

The motion was amended to instruct the Tech Rep to investigate how best to spend £150 of the £300 Wadham has won on a drone.

SU committee members and Wadham students appeared unwilling to speak to Cherwell about the plans. The Tech Rep, Saul Mendelson, had allegedly “strongly advised against offering comment” to student reporters. He later informed Cherwell he was “just kidding”.

According to the motion, the SU plans to use the drone “to make exciting access videos, to film Wadstock [the college’s annual music festival] from above, and to be rented out to other colleges when they need a drone”.

Teddy Hall JCR President Amelia Gabaldoni informed Cherwell that the college was “most probably” intending to use the money on welfare teas.

The Wadham motion intends to use £50 on the “purchase of donuts, snacks and drinks” and donate a further £50 to each of the two nominated RAG charities, which were decided in the OUSU elections.

Amongst students who were willing to voice their views, opinions on the drone were mixed.

On the SU’s Facebook page, one second-year student said: “The drone is clearly an essentially needed aspect of college life.”

However, other students were more critical. Rachel Collett, a Wadham first-year, told Cherwell: “A poor quality camera filming football matches or promotional Wadham videos is a complete waste of money that could be used to actually benefit the SU and Wadham students.”

She added: “Fundamentally the money could be put to much better uses like buying condoms, tampons, or other welfare-related things.”

Another student, who wished to remain anonymous, said: “I think it’s ridiculous that Wadham SU are considering spending such a large amount of money on what is little more than a rather flashy toy.”

They said the drone “will be something only a small group of people will enjoy using”.

Bertholdi-Saad, the motion’s proposer, did not respond to Cherwell’s request for comment.