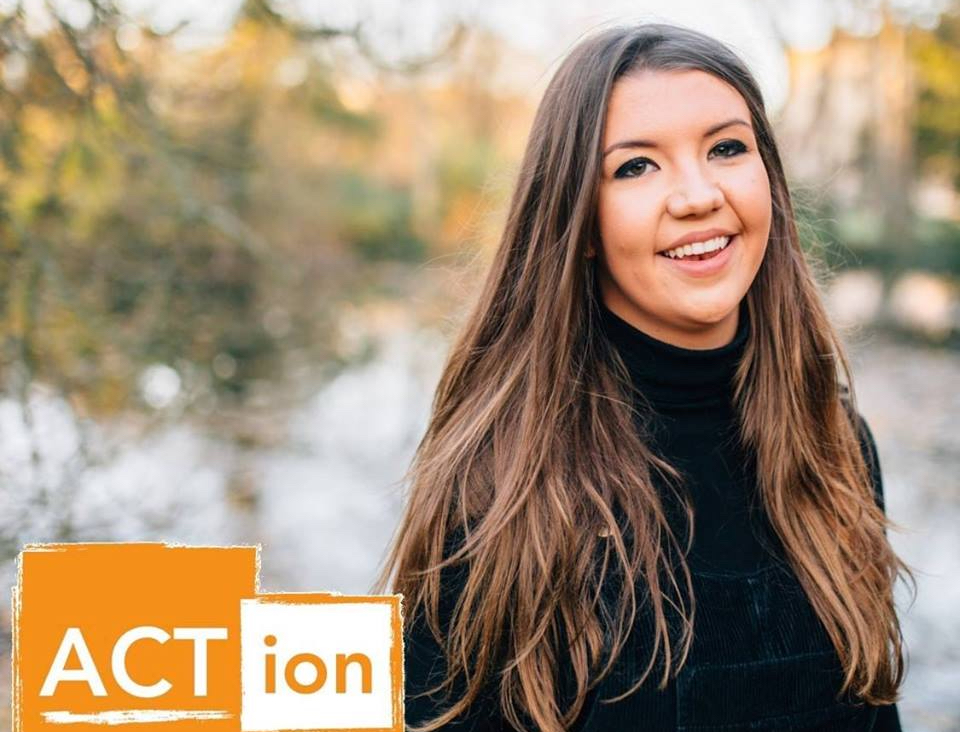 This amounts to just 10 per cent of the total student population, but is higher than the 6.3 per cent achieved by last year’s winning candidate, Jack Hampton.

Overall 4,454 students voted—a record turnout of 19 per cent, and an increase of 42 per cent on last year. OUSU held a results party in Oxford restaurant The Jam Factory to announce the results, featuring live music and entertainment.

Over one thousand people were invited to the Facebook event. A few dozen attended. Two notable absences were both Presidential candidates.

Following her victory she said: “Massive thanks to the opposition Vivian, you have been a great opposition and a great friend. I’m so glad that I’ve made a friend out of this process.

“To every person who has voted, sent us lovely well wishes, and put up with our relentless Facebook posturing. We couldn’t be more grateful.”

Fellow #takeACTion slate member Katy Haigh was elected VP for Women. Shortly after the results were announced she told Cherwell: “Thank you to everyone who voted for the ACTion slate, to those of you who supported our campaign, and to our competitors for always being pleasant and professional during this election.

“I am so excited to work with those who identify as women in the next academic year as their representative and I’m confident that I can provide support for all students across oxford no matter what they may be going through.

Katy Haigh took VP for Women, and Catherine Canning won the VP for Access and Academic Affairs unopposed. Canning told Cherwell: “I am so grateful to everyone that voted. I look forward to representing the students of Oxford and being their voice in vital discussions regarding improving access and academic issues.

“I want OUSU to be accountable, consistent and transparent next year and for all Oxford students. We have a fabulous team and I look forward to working with them.”

Tom Barringer was elected unopposed as VP for Charities and Communities. Farheen Ahmed will become VP for Welfare and Equal Opportunities.

‘Stand Up For Oxford’ told Cherwell: “We as a campaign are very pleased that the turnout this year was 40% higher than the year before. The increased level of student engagement makes makes us optimistic about the future of OUSU elections, and hopeful for an even higher turnout next time.

“We are thrilled that Farheen Ahmed was elected, and are excited for the brilliant work she will carry out as VP Welfare and Equal Opportunities. We congratulate her, and Tom Barringer, Niamh White, and Ellie MacDonald for their victories.

“We are sorry we won’t be able to put forward the vision we had for OUSU, but we congratulate the rest of the candidates who were elected for their success.”

Hilsenrath told Cherwell: “I am of course proud and humbled that I won the vote of 692 of my fellow students, and look forward to representing them along with my fellow slate member Lucasta Bath at the NUS conference.

“Unfortunately, I will not be joined by Tom or Baruch, the other fantastic candidates on our slate. Nonetheless, we will look to fight for a more representative, welcoming NUS, and hold it to account to remove the anti-semitism and racism within its ranks.”

Tom Turner, the aforementioned ‘Wake Up NUS’ candidate who failed in his bid to win election as a delegate, said: “I’m happy that two of our candidates got on, and I look forward to seeing them do a fantastic job.

“Obviously I’m disappointed to not get on, though as long as my values get a voice at conference I don’t really mind who’s expressing them.”

An affiliate with the ‘Wake Up NUS’ slate was Alex Curtis of ‘Wake Up OUSU’ who was voted onto the position of Student Trustee, alongside Oliver Rice and Tarak Nath Gorai.

Sean O’Neil and Aliya Yule were elected as NUS delegates from the ‘Count On Us’ slate. They describe themselves as standing “for welfare, for education, for liberation”, but controversially refused at hustings to vow to vote against a hypothetical reelection of Malia Bouattia, the divisive President of the NUS who has previously been condemned as an anti-semite.

Yule argued that Bouattia had issued a further apology for her alleged anti-Semitic comments, and thus could not be discounted off-hand.

Following the announcement of the results, Yule told Cherwell: “It’s the overwhelming vote to stay in NUS and this election that shows that Oxford students want to stay in the NUS and fight to make it different.”