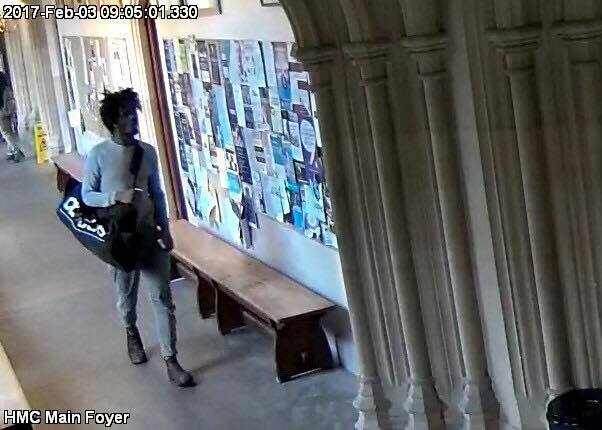 Harris Manchester College sent around an email warning about “unauthorized persons” in college, attaching a CCTV image of Oluwafemi Nylander, a prominent Rhodes Must Fall campaigner who studied PPE at Regent’s Park College.

Nylander told Cherwell he was “not an intruder in any way” and entered the college last Thursday evening to pick up a key from a friend’s office. The friend had given him a code to enter and permission to stay in his office.

“On trying to leave the college I realised that I couldn’t get out without a fob, so I decided to stay and work on my book in my friend’s office. In the morning I chatted to members of staff in the JCR about breakfast. They approached and told me it didn’t open until 8 at 7:50. They made no effort to ask who I was, though, and so there was no indication that there was any trouble. Afterwards I left.”

“I wish I could say I was annoyed or distraught, but I am not surprised. There are more Etonians at Oxford than blacks. It is a very problematic university.”

The email sent to Harris Manchester’s JCR and staff mailing lists by states: “This is a serious reminder that this wonderful and safe environment in which we live and work can be taken advantage of. We must all do our bit in maintain vigilance against unauthorized persons in College.

“Attached is an image taken from our CCTV of a person discovered in college this morning. Seen previously, it had been thought that the person was attached to All Souls College. This is not the case. If you see the person in the attached image, then please alert a member of staff. If no staff are available out of hours then you may call the university security services on 01865 289999.

“We are unaware of the intentions of the individual. Previous interactions with them have been amenable so the college does not currently feel that there Is any level of danger, to either persons or properly. As always do talk to a member of staff if you should have any concerns.”

A spokesperson for Harris Manchester college told Cherwell: “On the college site we have one building, which is occupied by members of All Souls College. On Friday morning I received a telephone call from the Manciple of All Souls who had been contacted by a Fellow of the college to say that there was an unknown person in that building at 11.30pm on Thursday night and that he had again been seen outside the building on Friday morning at 7am.

“They wanted access to the CCTV footage at HMC. From this footage they identified their intruder who was then seen following one of our staff in to the main college building at 7.30am. He was also on CCTV leaving the college at 9.05am. All Souls confirmed that he was not a member of their college and certainly not of Harris Manchester, nor was he the guest of anyone in either college. This being the case and there obviously having been a breach in security with an ‘intruder ‘ in the college buildings overnight, it was appropriate to send an e-mail and CCTV picture to our own members. In exceptional circumstances we will do that. The college is home for many students and Fellows and it is important to protect their safety.”

Students reacted with outrage on the Facebook group Race Matters to Nylander’s post featuring an image of him walking through the main foyer, which was sent out to students and staff. He captioned the post, which has over 700 likes, “That feeling when your picking something up from a friend at an Ox college and they end up sending CCTV of you to the whole mailing list”.

One Facebook user commented: “Just another day as a Black man in a white world. Sorry you had to go through this inexcusable humiliation Femi”.

Another added: “Wow, The number of people who just walk in and out of colleges all the time.”

Harris Manchester College is yet to contact Nylander following the incident.

The Oxford graduate has previously campaigned against colonial commemoration at Oxford.

In June he stood shirtless outside the High Street entrance to All Souls College in protest against the Codrington Library and commemoration of its founder, Christopher Codrington.

He wore a chain around his neck and ‘All Slaves College’ painted on his chest in red paint, which was intended to resemble blood.