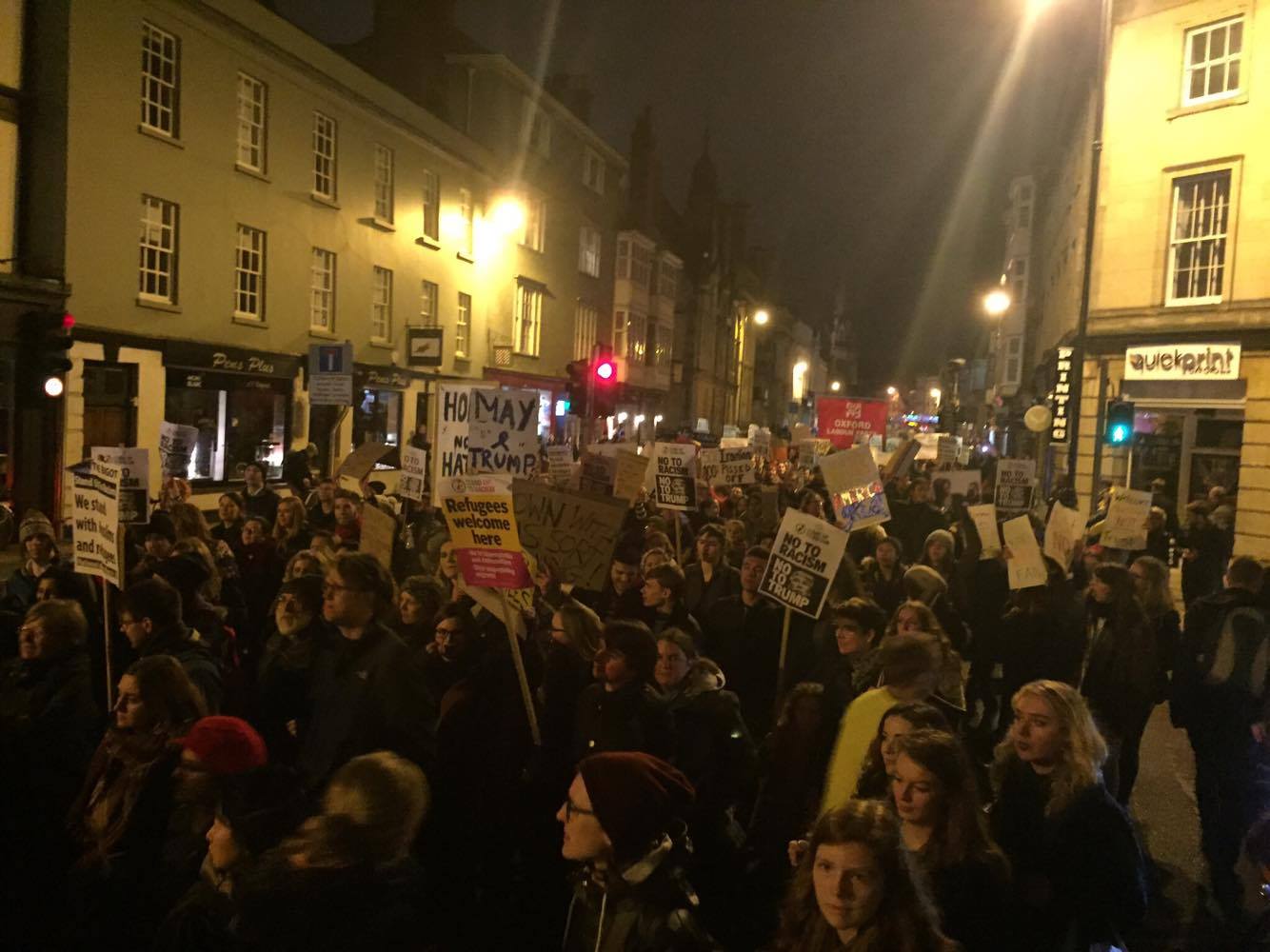 On Monday night approximately 2,500 people took to the streets of Oxford to protest President Donald Trump’s latest executive order, which bans refugees and people from seven Muslim-majority countries from entering the United States.

The protesters began assembling at Carfax Tower at around 5.30pm this evening to take part in the march organised on Facebook by Oxford Stand Up to Racism, Oxford Momentum, and Oxford University Islamic Society. It was also supported by Oxford and District Trades Council and Oxfordshire UNISON Health Branch.

Students, residents and protesters marched from Cornmarket Street down the High Street to Magdalen Bridge and back again.

There were a number of chants during the march, including: “No Trump, no KKK, no fascists USA,” “Say it loud, say it clear, refugees are welcome here,” and “Theresa May hear us shout, Muslims in, racists out”,

Those marching also held various homemade banners, with slogans such as “I hope Humpty Dumpty falls off his wall,” “Donald Trump makes me gag and not in a good way,”, “Feed him to the corgis” and the motto of Hillary Clinton’s failed presidential campaign “love trumps hate”.

Two protesters marching against Trump in Oxford say “feed him to the corgis” pic.twitter.com/p0KzKZ5dka

A spokesperson for Oxford Stand up to Racism told Cherwell: “Tonight’s protest was an absolutely fantastic show of solidarity with migrants, Muslims and refugees; those affected by President Trump’s ban, and those who are being demonised by his racist rhetoric.

“The protest was also a show of defiance against politicians using racism as a political weapon to distract and divert people. The energy was incredible and there’s a strong sense of people going away to build for the national Stand Up To Racism demonstration on March 18.”

Third-year student Alex Shickell, who attended the protest, told Cherwell: “I went because coming from a family which has been shaped by displacements caused by war, dictatorships and autocracies, I sympathise with the Muslim cause and want my voice to be heard.

“I think Facebook activism helped to spread news of the event really fast, and there’s generally a strong anti-Trump sentiment amongst the student population.”

Alfie Steer of University College said: “I marched out of complete horror at Trumps Proto-fascistic program in the last 8 days. I hope that the campaign demonstrates our solidarity with the American people terrified by this as well as a clear message to Theresa May that her appeasement of Trump is totally unacceptable to the American people.”

St Peter’s student Isabella Rooney told Cherwell: “It was very well organised and really well attended, it was inspiring to see such a high turnout of young people, especially leading the chants and holding signs.”

Councillor Dan Iley-Williamson, who represents Holywell Ward for the Labour Party on Oxford City Council, said: ‘Tonight’s protest was a powerful rejection of division and hate. Donald Trump’s policy is not intended to make anyone safer. It is a cynical move aimed at stoking people’s worst fears and suspicions. Theresa May has chosen to go hand in hand with Trump – not just down the Whitehouse steps, but politically, by prioritising immigration policy instead of protecting people’s living standards and public services. Millions of people across Britain are making clear that they will not go along with her strategy of appeasement. The planned state visit by Donald Trump should be cancelled immediately.’

Oxford University Islamic Society, Oxford Stand up to Racism and Oxford momentum have been contacted for comment.

With additonal reporting from Lucy Enderby and Jack Hunter