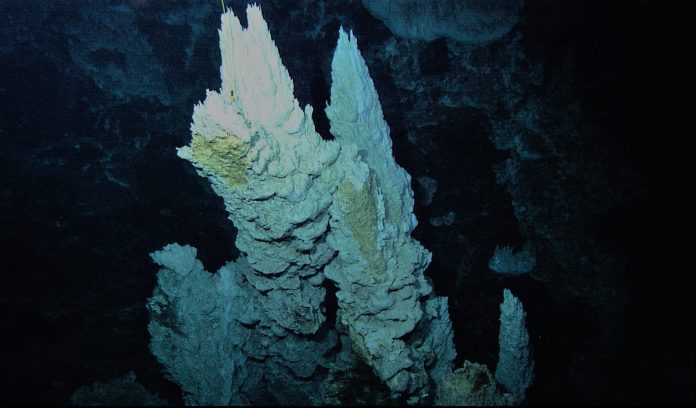 Theorising on the origin of life has always been popular in both science and in philosophy. Some even argue it is this that makes us human. Scientific theories and hypotheses abound, ranging from the traditional ‘primordial soup’, in which biological molecules build up in fermenting sludge, to clay or ice settings, or even to extra-terrestrial origins. Recently, another hypothesis has been taking popular science by storm. Reading the New Scientist or watching BBC’s Forces of Nature, you might be forgiven for thinking all other hypotheses have been left for dead.

The hypothesis is known in full as the ‘alkaline hydrothermal vent hypothesis’. Alkaline hydrothermal vents are towers of porous rock on the sea floor which spurt out warm, alkaline water into the surrounding seawater. Each tower is made up of thousands of interconnecting microscopic cavities, with each cavity a similar size to a biological cell. This vent hypothesis proposes that basic organic chemicals built up within these cavities, becoming concentrated enough to react and form the simple biochemical molecules that life relies on like RNA. From here, the ‘inorganic cells’ were free to ‘evolve’ via the synthesis of more complex biological molecules like proteins and DNA.

Dr Nick Lane is a principle proponent of this hypothesis. A biochemist at University College London and well-established popular science author, many a biochemistry applicant will be familiar with his name having embellished their personal statements with books such as Life Ascending and The Vital Question. “If you try to put complex ideas into terms that people who don’t have a scientific background can understand then you come face to face with all the things you don’t understand yourself,” Dr Lane says of his love of writing.

First, to set things straight, is this a hypothesis or a theory? “Hypothesis” is the prompt reply. The distinction is often ambiguous—“it’s a very difficult dividing line”—and the two terms are often used somewhat interchangeably, yet a theory would indicate a greater degree of certainty than the term ‘hypothesis’. “I think that for it to become a theory it requires a general consensus buy-in from most of the people in the field. From people outside the field there is a lot of buy in, but from people in the field, especially the chemists, there’s not very much at all. It’s quite a fractious topic.” This by no means indicates that the idea is incorrect, but highlights that “it requires a lot more experimental work behind it than there is at the moment”.

“We’ve managed to make some very simple molecules: two or three carbons in a chain and that’s about it so far. What we’re doing now is almost amateurish in the sense that the vents themselves are tens of metres tall, they’re at high pressure, there are all kinds of catalysts— we don’t really know exactly what they are— and back four billion years ago it would have been strictly anoxic conditions, where you would expect these reactions to happen much better. In the lab we’re doing it on a very small scale; the conditions are not equivalent really. The hope is that it works a bit so that we can get the attention of others to do more of it.”

The difficulty is that other chemists, working under very different reaction conditions from those which would have been found in the alkaline hydrothermal vents, have got far further down the biochemical line with their simulations. “The chemistry works very well if you start with cyanide, for example, and you use ultraviolet radiation as an energy source. That’s why the chemists are not persuaded that the vents have anything to offer. You will get UV radiation in sunlit environments; deep sea hydrothermal vents don’t have any UV radiation to speak of…but the problem from my point of view is that no cell uses cyanide as a source of either carbon or nitrogen—[in fact] it’s a pretty serious toxin. And no cell uses UV radiation as a source of energy; it’s damaging rather than creative. So either there is a big discontinuity in the origin of life, and [mechanisms used by modern life had to be] reinvented from scratch, or there’s something about the more reluctant chemistry in hydrothermal vents which allows carbon dioxide to react with hydrogen.”

This is where the alkaline hydrothermal vent hypothesis comes into its own. Whereas other theories may ‘work’ better in terms of making the molecular building blocks of life, they make less sense in their proposed evolutionary routes from the very first life form to those we see around us today. For example, many key enzymes—that is, biological catalysts—used by life today have iron-sulphur minerals at their reaction centre, catalysts that would have lined the walls of the vents at the emergence of life 3.8 billion years ago.

The key idea of the hypothesis, though, is the proposed ‘power source’ for the life-forming reactions in the vents. In order to build biological molecules, there must be a source of energy to make the reactions proceed—biological molecules cannot just spontaneously form. Every living cell alive today uses a bizarre mechanism for generating this energy involving the flow of protons across a membrane, similar to the way in which flowing water generates electricity in hydroelectric plants. The alkaline hydrothermal vents are predicted to have had a similar, natural proton flow across the porous vent walls, and a plausible mechanism for primordial reactions harnessing this flow can be drawn up.

“The proponents of other theories don’t feel obliged to [offer an explanation for this] because it requires very complex membranes and fairly complex proteins to operate at all, so it’s easy to say ‘Oh well, it arose later’.”

Yet all life relies so heavily upon this mechanism that it would seem logical to assume that the last ancestor common to all life did likewise. “What the biological context really says is that not only is all life doing it, but also that both sides of the deepest split in life—between bacteria and archaea—are using proton gradients to drive growth and metabolism, but the way in which they generate the proton gradients differs. That implies they perhaps used natural proton gradients and puts you into the vent scenario. So it’s not proof, but it points in a direction which suggests there is a problem to answer.”

“It is very easy to avoid questions in this field because there are so many. As a biochemist I see the most relevant and most interesting questions as different from [those of the chemists].”

Lane hopes that further chemical simulations will provide the evidential support hypothesis needs. It is worth remembering, however, that research into the origin of life has always been—and should always be—viewed with some caution. Until the invention of a time machine we will never be able to prove that life on Earth started in any one way, the closest we will ever come is stating that it could have done.