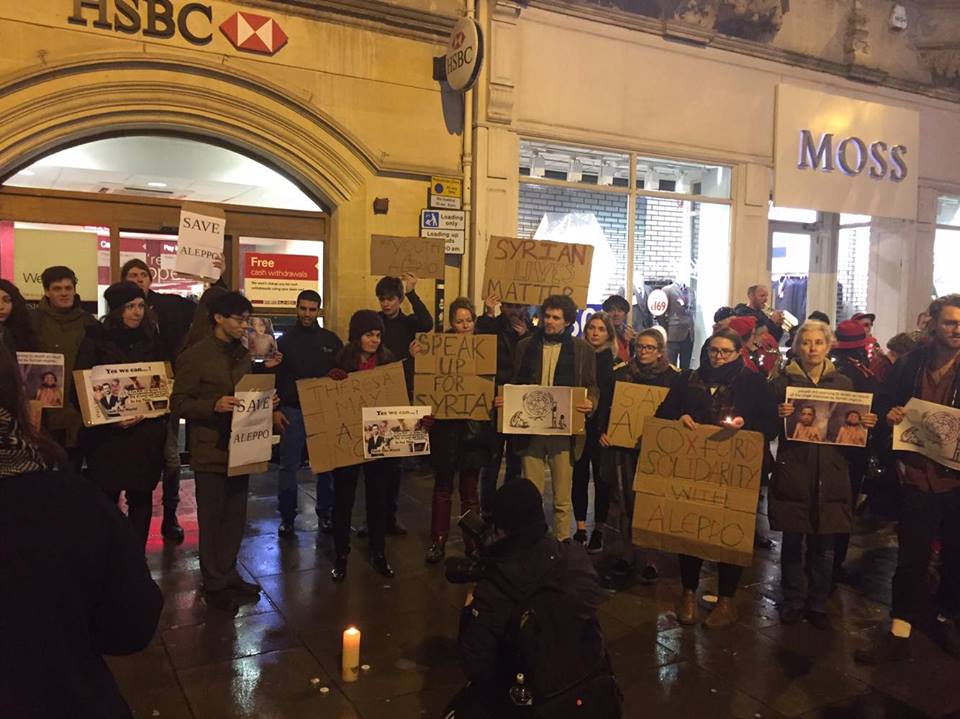 Jack Hunterhttps://jackrhunter.com/
Jack Hunter was the editor of Cherwell in MT17. Follow him: @_jackhunter or email [email protected]
13th December 2016

Students, researchers and other campaigners gathered on Cornmarket Street on Tuesday evening to condemn atrocities by the Syrian regime in Aleppo and demand action from Britain and its allies to bring about a ceasefire in the city.

The Oxford protest, called by the Oxford Solidarity for Syria group, drew around 40 supporters who lit candles and displayed signs with slogans such as “Speak up for Syria” and “Syria needs food not bombs”.

Similar ‘emergency protests’ took place in cities across the UK after the UN estimated at least 82 civilians were killed in Aleppo on Monday after what one official called “a complete meltdown of humanity”.

Peter Hill, a spokesperson for the Oxford Solidarity for Syria group, told Cherwell, “This demonstration has been called to draw attention to this critical situation, and to call for an immediate ceasefire to protect civilians and for humanitarian aid to the besieged areas.”

“Assad and his Russian backers may be winning the military war, but we can and must bear witness to their atrocities and express our solidarity with their victims, who also represent the last vestiges of the Syrian Revolution.”

Suja Sawafta, a DPhil student at St Antony’s college who attended the protest, said, “We wanted to make a physical stance and be visible in the holidays so people are aware. We need to put pressure on our governments to intervene and place pressure on Russia particularly because they are the people funding the Assad regime at the moment.”

Oxford Solidarity for Syria blamed the “silent complicity of world powers including the USA and Britain” for allowing the Assad regime to carry out atrocities in Aleppo and “extinguish the last sparks of the Syrian Revolution”. On Monday, a Syrian military source warned that the last rebel pocket in Aleppo could fall “at any moment”.

Following a deal made between the Russian military and Turkish intelligence, a ceasefire came into effect in Aleppo at around 6pm local time. Residents in East Aleppo and opposition fighters can now be evacuated from besieged neighbourhoods of the city.

An emergency meeting of the UN Security Council is scheduled to take place on Tuesday to discuss what the French ambassador to the UN described as “the worst humanitarian tragedy of the 21st century unfolding before our eyes”.