Surya Bowyer is stunned by this highly innovative piece of theatre 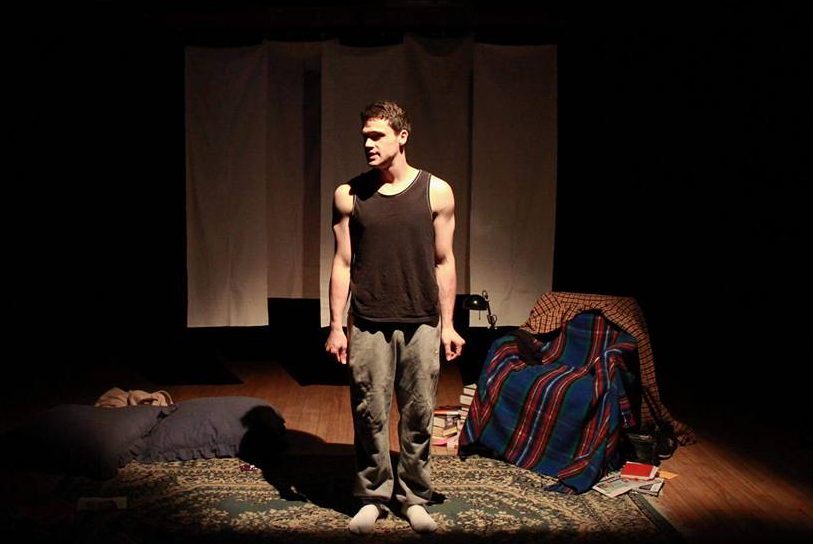 Formulating opinions upon a piece of new writing after having only experienced a small segment of it, as I had to do when writing the preview for this show, is always a curious affair. A process of synecdoche must be enacted, whereby one must make generalisations and extensions to whatever is actually shown in the preview itself. As such, when I stated “Go, take forty minutes out of your evening of procrastination and see the play … for once with new writing at the BT, you won’t regret it”, I was as much urging myself as I was the reader. The finished whole was as much a mystery to me as it will be to anyone else who hasn’t seen it yet.

A project as ambitious and unusual as Me & Mike left a lot of room for error. It makes use projection (both still images and video), which opens up myriad possibilities of technological teething problems that could dent or even derail its five day run. Its narrative style – vignettes – opens up the possibility of disjointedness and/or lack of coherence. The play relies on a stellar performance from its lead (and only) actor Will Stevens. The writing, which I had only a small taste in the preview, could turn out to be far less interesting than that in the single scene I was presented with.

And yet it doesn’t. A small hiccup in the playing of a video clip on opening night was covered by Stevens, who hardly flinched when it became clear something wasn’t quite working. The abrupt cuts in the music cues between vignettes, at first somewhat off-putting, feed into a larger comment on the vacuous nature of modern living. The flats that hang towards the back of the stage add to this idea, being staggered so as to create a slightly unnerving dislocation to the images shown, though without ever affecting our ability to perceive what they are showing.

Stevens is remarkable. His speech rhythms and the half-excited, half-nervous tone he adopts create a blend of eagerness, vulnerability and intimacy that otherwise is only seen amongst toddlers. It works. He, under Laura Day’s excellent direction, takes Alexander Hartley’s script and delivers it beautifully, ensuring that every offhand joke and moment of black comedy shines through – there were far more laughs on the opening night than I had anticipated when watching the preview.

The character that Day and Stevens have built is an intriguingly multifaceted creation. Compulsively organised – at one point outlining the minutiae of his forthcoming day whilst shaving, and creating plan after plan after plan throughout – whilst simultaneously suffering from a ceaseless feeling of powerlessness and meaninglessness. The twenty-something student will no doubt empathise, not least when he speaks of saving phone credit, or when he struggles to dance to in-vogue electronic music, or in an extended confession scene: “I think I am the most interesting person I have ever met… I don’t actually go to Mass, I only said that because it makes me look like the kind of person I want to be…Whenever I meet someone new I try and put off them realising I am worthless and egotistical for as long as possible.” These are the ugly thoughts that pop into many of our heads, but which we bury and ignore. That the narrator is sharing them with us only strengthens the intimate dialogue between speaker and interloper that Stevens so masterfully curates.

Me & Mike is less of a play in the conventional sense, and far more of a glimpse into the life of someone. The narrator was written by Hartley without a gender in mind, meaning that there is none of the stereotypical macho maleness that can sometimes be found in the psyche of male characters. Rather, he is a multivalent creation, but one with which we can all identify. Someone who invites their lover over to watch David Attenborough and ends up having sex. Someone who sometimes thinks of other people during sex. Someone who wants to be successful but who is afraid of the wider world, afraid that it is hostile to them, afraid that is meaningless. This one was certainly worth a watch.