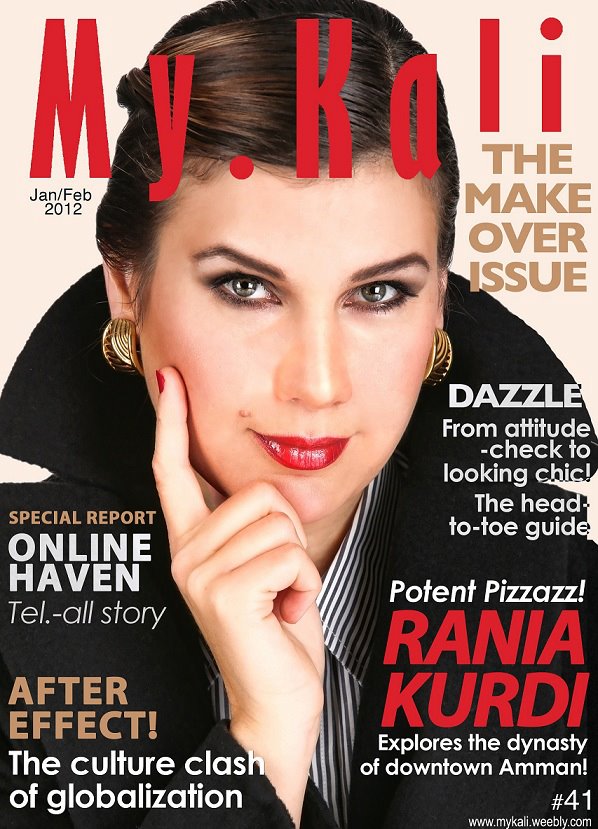 The Skype video crashed again, the picture froze and the voice at the other end crackled. After about 15 minutes of Skype failing to connect, we decided to give up on video and just chat. The bodiless voice came through: “Can you hear me now?” I could, so we finally began to talk.

The voice belonged to Khalid Abdel-Hadi, founder and creative director of My.Kali Magazine, one of the first LGBTQ magazines in the Middle East and the first in Jordan. More than eight years ago a group of LGBTQ people came together and founded a magazine for their community in Amman; over the years it has expanded to become a regional platform for LGBTQ issues.

My.Kali has survived the regional turmoil and continues to give the community a voice. It has seen increasing acceptance of LGBTQ groups in some countries, as well as growing violence in others. Since its foundation in 2007, it has been running features on pop culture, the underground LGBTQ scene, and interviews with some of the biggest young stars of the Middle East.

They’ve interviewed Hamed Sino, the openly gay singer of Mashrou’ Leila, a popular Lebanese band, alongside other celebrities such as Yasmine Hamdan, Alaa Wardi, Hana Malha, Zahed Sultan and many more, all of whom support gay rights and liberation movements across the region. My.Kali recently began to be published in Arabic as well as English, and has gained followers from across the Middle East, North Africa and beyond.

Now the technical issues were resolved, we had a laugh about the slow Jordanian internet, then discussed the role of the magazine in raising awareness of LGBTQ rights in the Middle East.

“There are lots of negative things going on in the Middle East with regards to the LGBTQ community, for example in Saudi Arabia and Egypt,” Khalid tells me. “So when you see the magazine in Jordan you see that there is hope and possibility, it counters the negativity.”

The need for hope is a continuing theme throughout our conversation. It is clear that Khalid dared to found such an unprecedented webzine out of a desire to provide support to all those struggling to be LGBTQ in a society that is generally hostile towards those who express homosexuality.

“During the time when everything started off with the magazine, we were literally one of the first outlets to be discussing homosexuality in Jordan. We were also one of the first platforms to bring a discussion of LGBTQ people into the Jordanian media. This was sort of a shock to us, to all of us, because we were sort of put out there by Islamist papers and then we were forced to deal with that. But the publicity around our initiative helped the visibility of the LGBTQ scene in Jordan and the MENA (Middle East and North Africa) region.”

Khalid tells me that My.Kali’s success “is a sort of retaliation” to the homophobia and negativity surrounding the issue of LGBTQ rights in the region. But he also explains that the issue goes beyond the Middle East: “We’re suffering from orientalist imperialism, so we can’t help but be brushed off by the Western LGBTQ movement.”

It is clearly a difficult balance for the LGBTQ community to remain a part of their culture and also express their sexuality and identity. This balance is one that the community, and My.Kali, is slowly starting to find. Khalid explains that the dialogue surrounding LGBTQ issues was always in English and Westwardlooking, but now it’s moving more and more to Arabic and realising that this dialogue can actually fit it into an Arabic and MENA context. The Western perspective is no longer needed.

This new independence in the movement is coming out of a deeper understanding of religion among the community. “A lot of LGBTQ people are coming out and saying ‘I am Muslim and I am also LGBTQ.’ These individuals, including myself, then search more within religion to form an understanding of our existence and identity within the faiths of the Arab world. This helps people to understand that there is space for an LGBTQ Muslim movement.”

I ask Khalid what the future for LGBTQ people in the Middle East looks like. His response is heartening. “It certainly looks positive. This may sound contradictory in this hectic time of war, but in Iraq last year the first LGBTQ publication opened [IraQueer]. Recently in Tunisia a student was arrested for being gay after incriminating texts were found on a phone but public protest and a petition forced the government to reduce his sentence and release him. More LGBTQ voices are breaking out.